This is a little photo essay on vehicles I’ve seen in Korea. You may be familiar with some — for example, passenger cars, so common I’m not even going to include them. Others may be new or unusual for you. This is a bit of a work in progress… as I update the page, I’ll post regular blog entries to let you know.  As always, click on a picture to open the full-size copy.

Backpacks:  I read-or-someone-told-me that the basic rigid (metal frame) backpack was originally based on the rigs that Korean porters used during the Korean War.  And, interestingly, when the movers unpacked the truck, they carried the boxes on their back, reaching behind themselves to get a grip on the bottom.  Not sure that would work for me, but they did carry the most extraordinary loads.

The example shown here was in the Namdaemun Market, and was one of several lined up as if for sale… but it looked as if it was a “working” backpack, which would make sense in the dense, pedestrianized market, and I have seen a few in use there (but wasn’t quick enough on the draw to get a photo).

Yogurt Carts:  These come in a variety of sizes, often with additional cool-boxes strapped on.  Most that I’ve seen are motorized, but the 3rd one below is an eco-friendly push-cart with bicycle tires.  It’s the only one of its kind that I’ve ever seen, all the others are the boxy motorized ones.

These ladies, who all dress alike, sell yoghurt.  Like milkmen of old, they make their rounds delivering standard daily orders of yoghurt.  But they carry extra too, so you can always buy a bit of yoghurt!

Paper Collectors:  This category is fairly depressing.  There are large numbers of old people, both men and women, who seem to spend their days pulling hand-carts around collecting paper and cardboard, in all weather.  While it’s good that so much is (presumably) being recycled, this looks like something that originated in the 50’s after the war and somehow has just never been updated.  Unlike the delivery bikes below, I’ve never seen an updated version of the “paper cart”.

Bicycle Delivery:  This is definitely something from another day-and-age, and my guess is that in 5 or 10 years you won’t see any more bicycles or delivery men like this.  Most of the work has moved to scooters and, in particular, to motorcycles of varying types (see below).  But for now, you can still see the bicycle delivery man from time to time.  Given the size of the city, I also suspect the deliveries are comparatively (!) local.

The design of delivery motorcycles closely follows that of these (clearly old) bicycles, and is probably based on the original “push” bike design:  longer, reinforced frame; seat well forward; giving extra long cargo area behind the driver, who has to sit quite upright, as in the 3rd picture.

Well, the first thing to say is that you can’t swing a dead cat on the streets of Seoul without hitting a motorcycle deliveryman.  They are everywhere, delivering everything, in numbers (and with loads) waaaay beyond anything I’m familiar with.  I had two frozen turkeys delivered for Thanksgiving, from across town, on ice in styrofoam boxes.  And they come in several flavours (the delivery cycles, not the turkeys, that is) … .. .

Scooters:  I’ve seen these mostly for fast-food delivery, for international and local brands.  Not unique, but (for the likes of McD’s, BurgerKing, etc) not something I’ve seen much elsewhere.

Motorcycle  Delivery:  Whee!  This is the part you’ve been waiting for, the overladen motorcycles tearing through the streets of Asia?  It’s not quite the same here as in, say Vietnam (where we were for Christmas), where the loads were sometimes just plain crazy.  But you do get motorcycles with rather large loads.

The part that I find most interesting, though, is how they design their bikes, which are the direct descendants of the push bikes above:  a longer cargo platform, often with a customized stretched frame, and drivers sitting very upright as for the bicycles above.  How they park is interesting, too:  a metal pole, stored in a sort of scabard on the side of the bike, is unsheathed and used to prop up the bike.  Quick, effective and keeps the bike fairly vertical compared to some kick stands. 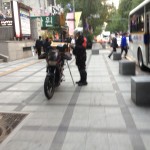 For sheets of glass!

You were waiting for this picture, weren’t you?

Three-wheelers:  My personal favorites.  No “auto-rickshaws” or “tuk-tuks” here, thank you, these are generally delivery vehicles (even a few I’ve seen that looked designed to carry passengers), and are often modified motorcycles.

The first couple look like they were produced in a factory, but most of the others look to be custom modifications.  As you can see, these run the gamut from light private trikes to heavy-duty cargo trikes pulling trailers.  And you thought trikes were only for kids!

saw a lot of these in Brussels

modified with training wheels added? Ok, this is really a FOUR wheeler.

another view of the last one 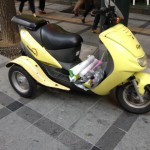 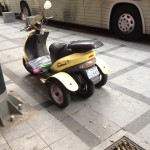 & another view of *this* 4-wheeler

make it into a stall

Portable Stalls: Not the trike-converted-into-a-stall as above, but the proper kiosk-type that  you see everywhere.  Not much to say here, but you’ve always wondered where all those stalls on the streets come from, haven’t you? From the controls, I think they might even have little electric motors for moving them around.

Most of them have electricity from long extension cords.

First, just to say that the public transportation system in Seoul is fantastic:  very extensive, well integrated, easy to use and cheap.  And with the bad city traffic over often long distances, that’s a real plus!

Second, get a “T-Money” card.  You can buy them in the staffed ticket booth in metro stations.  The physical card cost3,000 Won (approx. 2 Euro or 3 US Dollars), then you charge it up.  Almost any trip you make will cost you just over 1,000 Won (around 0.70 Euro or 1.00 US Dollars).  Often, you can use them also to pay for taxis and some convenience stores & attractions also accept thm.  They’re smart cards – just charge ’em up, swipe ’em on the pad as you enter & leave the bus or the metro system, and the fare is deducted from your card.  Remember to swipe the both as you get on & off / enter & leave… that is important!

Taxis: Every city has ’em.  Seoul has three common types of taxis that you can hail on the street [a.k.a. “two more types than, many places”] and, apparently even more types that I have not been aware of (such as services similar to the phone-only minicab services).   Whole webpages about taxis, e.g., on the lifeinkorea website.  Anyway, three basic kinds:

And there are finer gradations such as the mini-van version of a taxi etc.

International, but can anyone use it?

Buses:  Kind of like the taxis, there are a lot of different kinds of buses… yellow, green, blue, red, airport… The map on the right explains it all (well, mostly all).  And like the subway, there’s a great app for finding out your bus (I like the feature to find stops near you and then drill into the buses, including maps, to see where you can go.  Problem is you’re spoilt for choice:  just too many options.

As for the taxis, whole pages on the web about this.  The LifeInKorea page on buses is pretty good, as is the Visit Korea bus page from which I’ve (mostly) copied the following definitions.  I don’t think I’ve ever seen a Yellow bus myself.

is this a Yellow, or just a look-alike?

Subway & Train:  The subway system in Seoul is huge.  There are both apps and the online SMRTC subway map, with which you can pick your starting & destination stations, and it calculates the best route, with times and transfer instructions.  Getting around is a doddle.  Remember yer T-Money card!

Pictures of subways aren’t easy to come by.  Here are a few features of the system that I found unusual, which are reflected in the pics below

when’s me train due in?

Wierd Cars: I said this section was mostly cars.  I’ll add more shots as I find them…

Parking Lots:  Wierd windowless tall, narrow white buildings dot the city… multistory mechanical parking lots!  The cars are on a giant vertical conveyor belt.  Empty slot cycles into view… drive your car in… and it’s whisked away.  This is totally cool!  I haven’t used one yet.

The garage (a vertical panorama shot)

About to drive in. Gulp!

Close up view of the gaping maw.