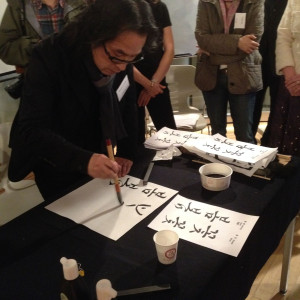 Our good friends at CICI invited us to a CQ17 evening learning Korean (Hangeul) calligraphy with famous calligrapher Kang Byung-in.  The “CQ Forum” refers to culture, communication, creativity, cooperation, concentration, etc, and this was part of the 17th CQ Forum, hence CQ17.  The CQ Forums are hosted by CICI, the Corea Image Communication Institute, headed by Choi JungHwa.  This wasn’t the first CQ event that we’ve been to, but was one of my favorites so far. 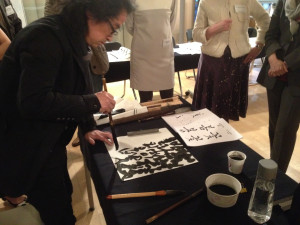 Mr. Kang gave us a brief presentation on the Korean alphabet, Hangeul, and then taught us how to hold & use the brushes.  Then we practiced, drawing lines, squares and circles.  Then he showed us how to write characters in formal script — i.e., looking much like the printed letters, quite easy to read — and demonstrated calligraphy… which for me is much harder to read although it is definitely more interesting!.  We practiced that with the words “spring” and “flower”.  Then he showed us calligraphic techniques again, we practiced a bit more, and then we had to do “flower” one last time, on better paper, all in one go, a “one-shot”. 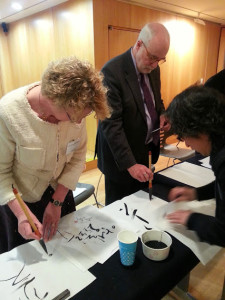 It was great fun learning the calligraphic techniques, and was absolutely fascinating to watch Mr. Kang’s demonstrations.  I’ve always been interested in calligraphy, if I don’t actually do any and am somewhat lackadaisical  (e.g., I greatly enjoyed Typo Janchi 2013, the Seoul International Typography Biennale, last fall, but typically I still haven’t made it to the Seoul Calligraphy Art Museum at the Seoul Arts Center… funny how permanent things get left till last!) 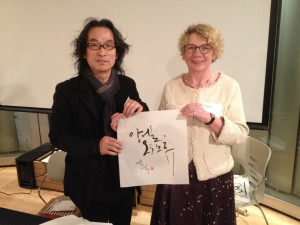 In addition to our final effort, we also took home a present from Mr. Kang: our name done in Hangeul calligraphy!  That was an unexpected and much appreciated treat.  The rendition of Austrian Ambassador Elisabeth Bertagnoli’s name had to be seen to be believed! 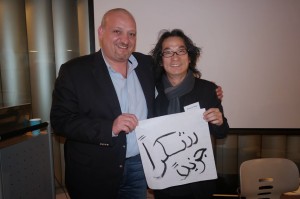 Anyway, it was a great evening and a big shout out to CICI (and the Alliance Française) for holding it.  Thanks!

Some of the pictures are mine, others were taken by photographers there.

Our names & our attempts at calligraphy 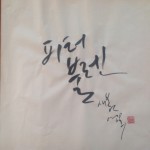 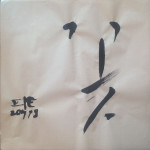 My video clips of Mr. Kang 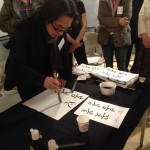 Learning to use the brushes

Aingeal and I posing as calligraphers