On Saturday night (31-Aug), we went to the final of the 2nd Quiz On Korea, at the KBS Hall in Yeouido.  It was a lot of fun, and we met a few people from the Irish Association of Korea.  I hadn’t been to Yeouido before — like Gangnam, it seemed mostly flat and full of big buildings – that sounds like something a child would say, but so far hills (and by Irish standards, mountains) feature prominently in my impressions of Seoul.

There was an Irish contestant, of course (or why else would we all have been there?), Alana O’Brien, who is near the center in a green dress — a lot of the contestants wore national dress or something that people would associate with the country, e.g. the American contestant as a cowboy, or the New Zealander dressed in All-Black gear carrying a rugby ball.

Neither F. nor I have never been to a TV studio before, so camera perched on a huge boom and another on a track running back & forth in front of the stage were interesting to both of us.  She wasn’t actually as enthousiastic to be there as she looks in the picture, but I think she had a good time overall.

The format of the contest was 3 rounds, each comprising as many questions as necessary to eliminate everyone except 1 finalist.  The questions were each a 1-minute video with the question and 3 multiple-choice answers in Korean & English.  Then, the 3 finalists went head-to-head, but the questions were posed without videos, and they had to answer out loud – no multiple choice.

The Irish fans (and all the others) were very enthousiastic whenever “their” contestant was getting attention, and in particular when the cameras happened to be playing over their seats in the audience.

Our Alana O’Brien did pretty well, surviving almost to the end of each round, but didn’t make it to the final.  But she says she might be back next year, so good luck next time!

The 3rd round was the longest (and they were waaaay over time at this point), with the American and New Zealand contestants both answering the questions the same, but eventually the Kiwi made it through to the final and eventually won.

Hint: Alana is 5th from the right

But the most fun all night was definitely the K-Pop groups that played after each round — Banana Pop, B.A.P. and Sistar.  “Aside from the obvious thrill of just being there”… well, it was a lot of fun, and it was interesting to see how massivly choreographed they were.  And there seems to be no star (nor instrumentalist) — after a line or two another member of the group starts to sing. 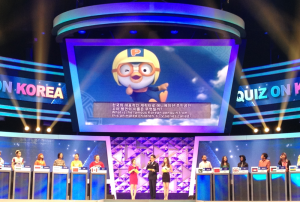 What is the famous Korean penguin from this animated children’s TV series called?

The upper level stands were packed with fan-boys and fan-girls, who chanted loudly during much of the songs, to the extent that you often couldn’t hear the music.  Some of the fans snuck downstairs and took empty seats, so there was a rotating group of K-Pop fans right in front of the stairs, quietly drifting in for the group that they followed, cameras & smart-phones at the ready.  Of course, when the 3rd group, Sistar, finished, they all left and the place emptied out a bit!

I recorded all 3 songs on my trusty (and new to me) iPhone 4s.  F has an iPhone 5… sigh!  [updated:] I’ve uploaded my 3 videos to YouTube.  Warning: the music is very faint, and (as it was on the night) sometimes completely drowned out by the fans chanting or screaming…. I’ve dug out some fan videos of the same show that have better sound also: 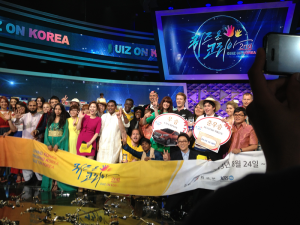 After the final, they did some group pics and then opened up the stage, so we headed up to say hi to Alana, who was in great form. 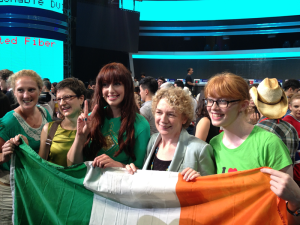 One Response to “Quiz On Korea”