I was at HomePlus shopping for a dinner party tomorrow, and was just about to have lunch in their food hall when Grace, my favorite (and only) sister, phoned from the States.  A pleasant surprise, and we had a nice chat, but I finally begged off as I was really getting hungry (and it was fairly late for her).  But before saying goodbye, I promised a few pictures of my lunch.

The HomePlus food court has a number of main cooking stands, across the back: Chinese, Japanese, Western, “Snacks”, Korean – I probably missed one! – where you pickup up the food.  (As always, click on a picture for a larger version).

You order in the front, where the center-piece is the large display case with the Plastic Food (see large photo above).  Just pick what looks good, literally, and pay the cashier at the end of the case.  And of course…  ¡Pidelo por su numero!

On either side of that are various small stalls imitating the street-food vendors you would see, um, on the street, one with street-food, another with tempura (have to try that next) as well as a dumpling stand. I have had to swear off dumplings for a while… just love ’em too much, and there is a bit more to Korean food than just dumplings.

I ordered Number Four, which was an octopus bibimbap.  Here it is in the Plastic Food menu… 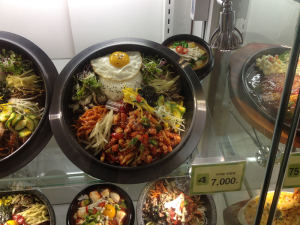 And here it is after I’d started mixing it up (sorry, forgot to shoot a pic first!). It had been recognizably the same dish as the Plastic Food version! And it was pretty good, but in fairness I am no judge. 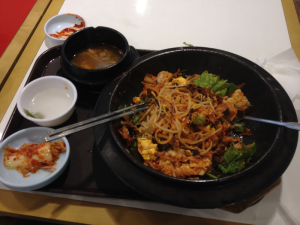