The pheasant was back yesterday, a chilly wet Spring Sunday — good time to have a “duvet day” & do very little.

Play below or click here to open in your computer’s default player:  2015-04-19_PheasantInGarden.mov

It’s amazing that we’ve taken 18 months to get to the Noryangjin Fish Market.  I mean, some people go there on their first day in Seoul.  Maybe that’s one of the nice things about living somewhere – no rush! (Of course, “no rush” can turn into “never got around to it” if you’re not careful).  But, as part of my continuing plan to Do Something Every Weekend, we finally went yesterday (& at A’s suggestion, too!).

It’s easy to get to – either take the metro (Line 1 to Noryangjin station) or driving over the Hangang Bridge (Hangang-daegyo 한강 대규), right onto Noryangjin-ro and then look for the signs “Fish Market”.

It’s a huge place, a cavernous concrete warehouse with a 2nd story along one side, which is where most of the restaurants are.  It was surprisingly clean and lacking in fish-smell.  When you enter, you’re on the aisle along one side of the place, with the restaurants on the balcony above you.  The first couple of aisles are mostly shellfish, crustaceans, sea urchins, eels, squid & octopus, etc.

Tentacles longer than my arm!

There’s no refrigeration — everything is kept on ice.  While most of the fish is obviously very fresh, some of it is still alive, in big tanks, as are the crabs & lobsters.  Pick your fish, and they spike it & scoop it out of the tank.  The shellfish, and sometimes the crabs too, are generally in large plastic tubs with aquarium pumps keeping the water full of oxygen.

Preparing a fish – butcher’s block with a splash guard

We really lucked out:  Unlike most of the restaurants, which are in the fishmarket and are really interior spaces, this was in a building behind the market, up on the 2nd floor with large windows – a very airy & pleasant place.  (If you’re looking for it, the entrance is roughly in the middle of  that side of the market; look for the sign with 812-6200.)

The white fish was steamed & served with a spicy chili & onion sauce on top (A. scraped of most of hers, which meant more sauce for me!), while the red fish was grilled.  We didn’t have much by way of side dishes or rice — I guess you have to order them, and we didn’t.  Just as well, as we’d only intended to cook one of the white fish, but forgot & so there was a bit more fish than we’d planned on.

…around to the right…

… and up the stairs

After lunch, we bought our giant prawns & large clams.  “Giant prawns” is a difficult term… in Spain, there was a term for each, from the smallest shrimp to the largest prawn.  But in English, I guess giant prawn will have to do.

Anyway, here are all the pics from above + a few more….

Preparing a fish – butcher’s block with a splash guard

Tentacles longer than my arm!

…around to the right…

… and up the stairs

Went to the office today, and had lunch with my friend KS & his team.  We ate in the 26th floor cafeteria at one of the nearby towers – the 235 Cafeteria, (if memory serves), named after the old building number.  The team were very nice, and the food was fine.  But… what a place!  No “C-Suite” here – top floor turned into the employee cafeteria — huge windows all the way around — pick your food & pick the view you want.  Very nice! 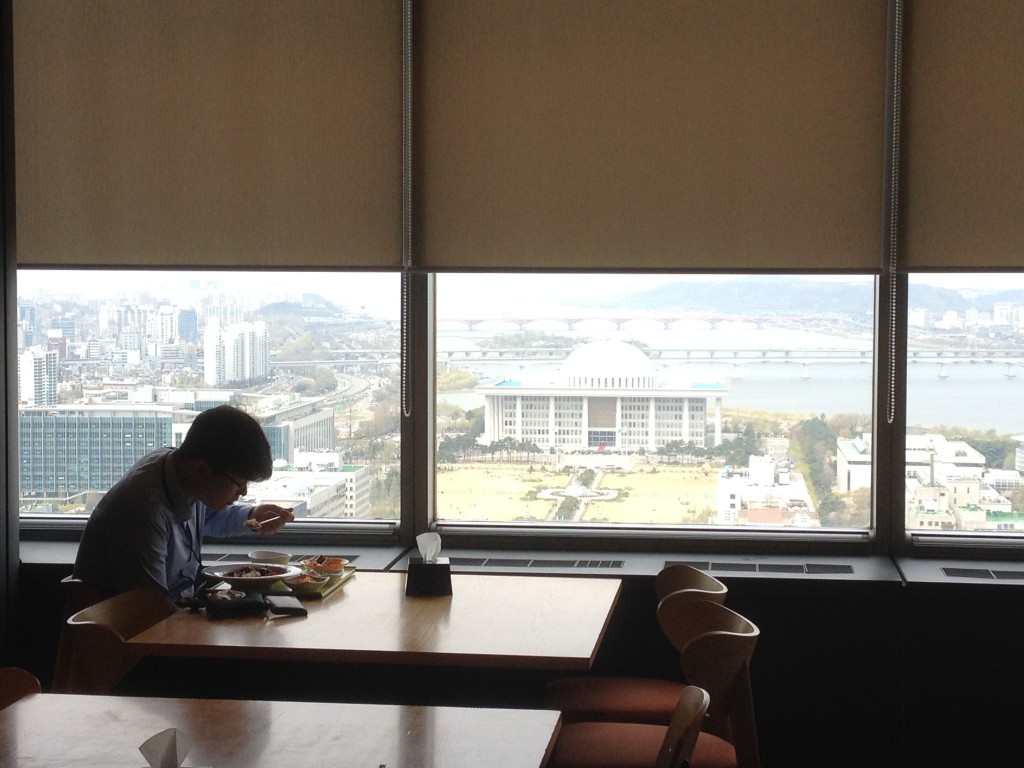 A diner, with the Parliament building in the background. 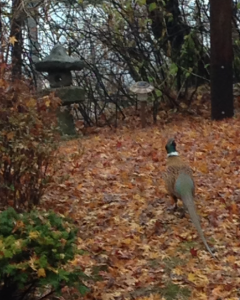 Last Friday, I thought my computer was making horrible about-to-crash noises. But it turned out to be coming from outside, some kind of bird — a ring-necked pheasant, we figured out later, after That Girl saw it on Saturday morning. I spotted it again this morning, as I was heading out to my office, and even got a picture of it (but not very good, think “picture of Big Foot”).  Those things move fast, and the sun in my eyes (wild birds can be wily :-) didn’t help any.

But this isn’t the first time this bird has been here:  Aingeal saw it outside our kitchen last fall, and took a really good picture.

If you want a better idea what they look like, or to hear their call (which by the way, is very loud when just outside your window), here’s a video from YouTube (this is someone else’s video — not of ‘our’ bird!).

I’d been trying to get into Seongbuk-dong Ole Noodles (성북동 올레국수) for ages & ages, and finally managed it in late February.  It’s a really small place — only has tables for maybe 8 people, plus a few at the bar (though, frankly, I doubt even the ever-svelt Koreans could squeeze in there well).  And that’s been the problem:  every time I stroll by, it’s been full.

Then, out of the blue… it was empty.  So empty, I thought it was closed, but I spotted one of the two women who runs it hiding in the kitchen, so I boldly went on in.

The menu, while in Korean, had sections handily labelled in English:  “Main Menu”, “Side Menu” and then other bits with no label.  I had the top items from the Mains & Sides. 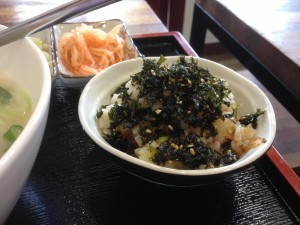 Very nice!  The main was a nice broth with noodles, chopped vegetables and some pieces of meat.  There seem to be no end to variations on that theme here, but this one was particularly nice, and despite the thick ribbon of fat on the edge of the pieces of meat, not greasy at all (nice trick!).

But the real surprise was the side dish, a lovely bit of rice with some bean in it, some dried seaweed on top… and a fair bit of caramelized onions mixed in.  What the heck?  Never seen anything like that here (nor have a few people I’ve mentioned it to). 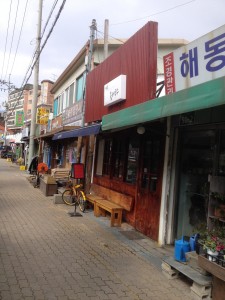 I’m waiting for the warmer weather… there is a flip-up counter on the outside, and if I remember, it’s an outdoor seating area.  Can’t wait for a nice day & someone to have lunch with for a change!

Conclusion:  It’s back to being packed, but worth waiting for a spot.  (Especially given how quickly lunches go here… the wait won’t be long!) 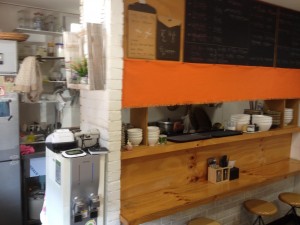