Weekend before last, I did a nice walk along a good bit of the next stretch of the Seoul City Wall.  Maybe too much:  I did the Heunginjimun Gate Section and most of the Namsan(Mongmyeoksan) Mountain Trail, including right up to the top of Namsan Mountain.  (On the map to the right, I went from the 1st arrow at top-right to the second at bottom-middle.)

I started at Dongdaemun Gate (left), where I’d ended up on my last City Wall walk (with a walk back home, which limits how far you’re going to go).  From there, it’s flat city walking for a little while, right through the Dongdaemun fashion district with the fantastic Dongdaemun Design Plaza (I also took a video of the Design Plaza, at http://youtu.be/ q7lzbQ0qxd0).

Then, through the small Gwanghuimun Gate (which was hard to find) & a very short section of wall before the route switches to streets for a bit.  From there to the bottom of Namsan Mountain is a proper wall again.  The climb up the mountain was a bit further than I thought, and my recently-sprained ankle had had enough when we got to the plaza at the foot of Seoul Tower.

So just a walk around there for the views(I didn’t go up the Tower), and then I took the cablecar & the funicular down to Namdaemun Market for a bite of lunch.  And finally a taxi home.

Funny thing is… I realize now that I didn’t take any pictures of Seoul Tower!  So here’s one from the Internet (credit https://www.flickr.com/photos/tokism/6909376149/ ).  Next time I’m up there, maybe I’ll take one and update this posting.

So early the stalls aren’t open! 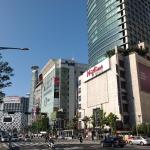 or is it 22nd? Dongdaemun Design Plaza.

And the trail takes to the streets.

Back to the wall again!

This was a lovely walk.

Even nicer when I was atop the wall. 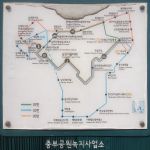 Seoul tower would have been in the background of their picture.

Locks! In other cities, a problem…

…In Korea, a feature.

The objects in the background are medieval warning fires.

Map of the walk up Namsan

Cable car back down.

I am endlessly fascinated by the rules governing public foot transportation here, specifically escalators & stairs, particularly in the subway. We saw some of that in Tokyo too, e.g., the “Do Not Rush!” signs that so amused me. Don’t get me wrong: a lot of these rules are a good idea! I’m just not used to seeing them publicized (nor obeyed!, especially after the previous 10 years in either Ireland or Belgium).

So, how could I resist this incredibly comprehensive poster on a Seoul metro? I’ve rotated the picture so that the top of the escalator in the poster is at the top… I was on the “wrong” side to get it properly oriented. 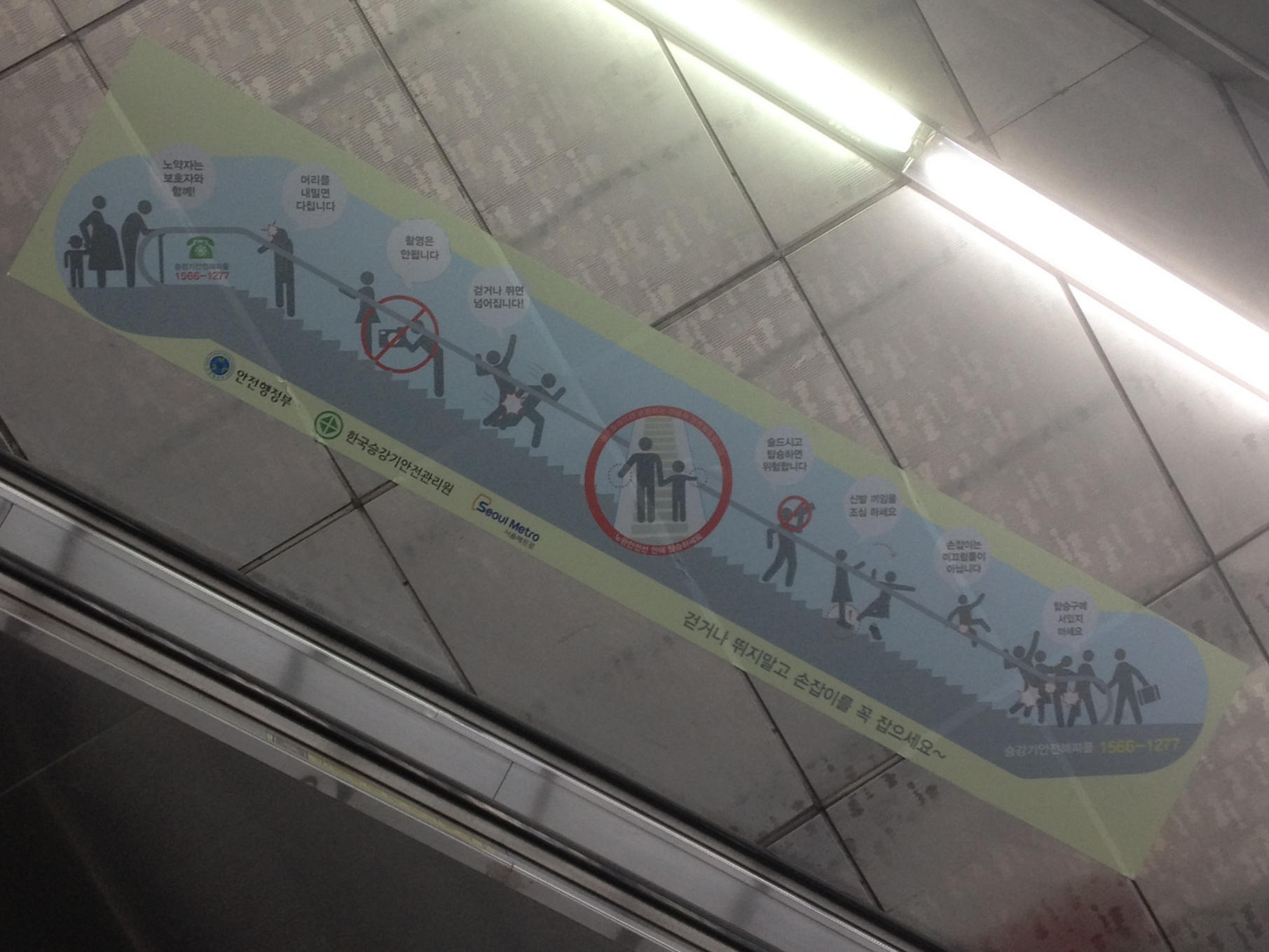 Conclusion?  Actually these are very sensible.  OK, I don’t agree with the”don’t walk” admonition in the Red Circle, and I’m surprised they include neither “don’t sit on the steps” nor “face forward”, but those are quibbles.

A new lunch place opened up down on Seongbuk-ro, the big road at the bottom of our hill.  My friend Kathy is crazy about it, says she wants to work there to learn Korean cooking, and that the cook is, for now, the owner’s mother.  That’s the owner in the photo above.  Place is new, modern, clean & pleasant — that’s a nice change, as lunch places can often be a bit heavy on the formica and flourescent lighting.

In fact, I’d quite forgotten about this place, but ran into Kathy & Ann Marie when I was out for lunch & considering where to go & they’d just eaten there & said that I should go there.  So I did.

Kathy recommended the Kimchi Prawns, but in the event I was served the Teriyaki Chicken.  Oh well.  It was OK, but I’m not a big fan of dishes with packaged sauce (in that category it was excellent… which gives it just OK overall).

So… worth another try, especially for the Kimchi Prawns.

I’ve been out on the last two Wednesdays, having a nice hike with the Seongbuk-dong Expat Group.  Svetlana’s been leading the hikes, and there’s a good number of people so far.  The Seongbuk-dong Expat Group dropped the word “Ladies” from its name shortly before I joined, though that may explain why I hadn’t heard of it until then ;-)  They’re a nice bunch, but I haven’t made it to any lunches after the first that I went to, the timing has not worked well for me.  Maybe next month.

Both Wednesdays so far, we’ve walked on the north slope below the Bugak Skyway, where there’s a real cluster of temples.  I’ve been meaning to get down there sometime, and am sorry that I left it so long — there are some very nice trails in addition to all the temples.

Those Wednesday hikes have also been a bit of putting my toe back in the water (as it were) after spraining my ankle, and buoyed by how well my ankle felt after last Wednesday, I went on a very long hike today, of which more later hopefully.

A talk with the nun about her dog that was attacked by a wild boar.

Carved out of the living rock.

A large Buddah indeed! But not as large as the Big Buddah of Kamakura.

Map of the trails. Our house is about a 10-minute walk off the left side of the map. 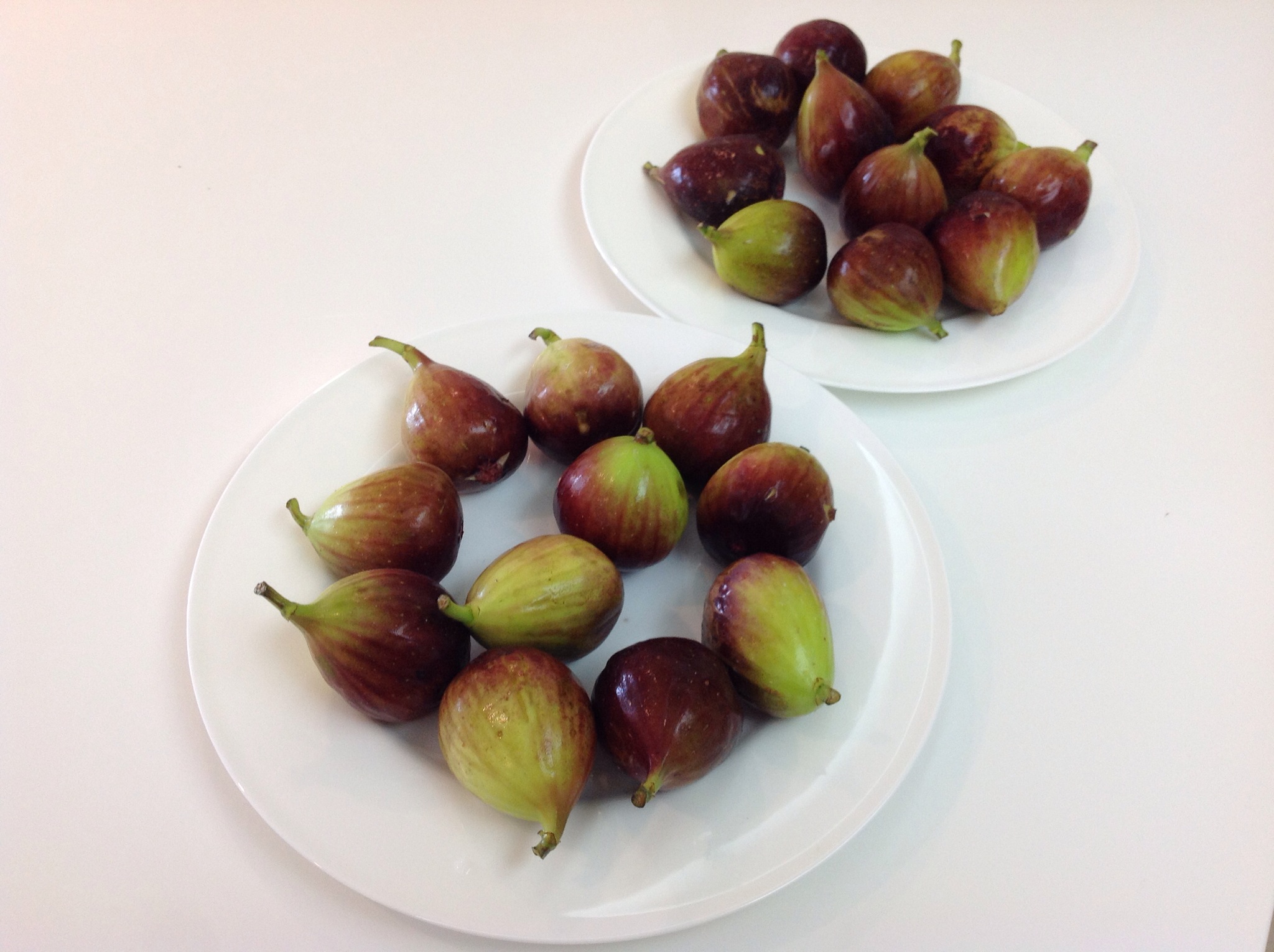