Well, it’s been quite the Week for Art.  First the Biennale in Gwangju (about which I’ve not yet posted anything) and then a visit to the opening of the Korea International Art Fair (KIAF), where we met a couple of Irish artists.  One of whom, composer Karen Power, went on an Arctic Circle Residency along with video artist Sungpil Han and technician Jinuk Baek.  They have a joint exhibit in the interactive section of KIAF.

Sungpil Han & Jinuk Baek had images from the Arctic, with an interactive system that would insert the visitors pictures into the scene when they crossed an (unmarked) line, but that wasn’t working jus then.  All that was overlayed with music by Karen Power, made from recordings of the Arctic ice & icebergs (which, it turns out, are a lot noisier than anyone expected… all the little bubbles in the ice make noise as they break free from the melting ice!).

The “TV” is the art. But the pic makes it look as if Aingeal is just vegging out!

Swirling light follows the objects. Like my elbow, as it turned out.

… when you’re done, they can print it on photo stock!

At the Arctic exhibit with the artists 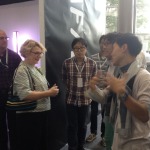 Here are somd pics from Tuesday, when we went to Asakusa Temple and then on to the Roppongi Hills.  First, the story of the temple; then some pictures from our visit & stroll in the neighborhood, and finally our visit to Roppongi Hills (not “hills” so much as “skyscraper on a hill, with a viewing deck”).

The next day, our last, Aingeal & I went to a museum.

These were displayed on the pedestrianized street leading up to the temple proper.  The street itself is mostly given over to souvenir stalls & shops, selling some kitsch, perhaps, but authentic kitsch.

Entrance to the spuvenir street

Aingeal answers a quiz for a student

Big Sandals (they also had them at the Big Buddha)

Behind this, a sort of sculpture garden

The River and metro across town to Roppongi Hills

Love the architecture in Tokyo

Rested by the river for a few mintues

Then metro to Roppongi Hills. We were not as well behaved as these salarymen.

Would you believe this is the SECOND of these statues that we’ve seen?

Turns out that not all fruit & veg is supersized in Korea… 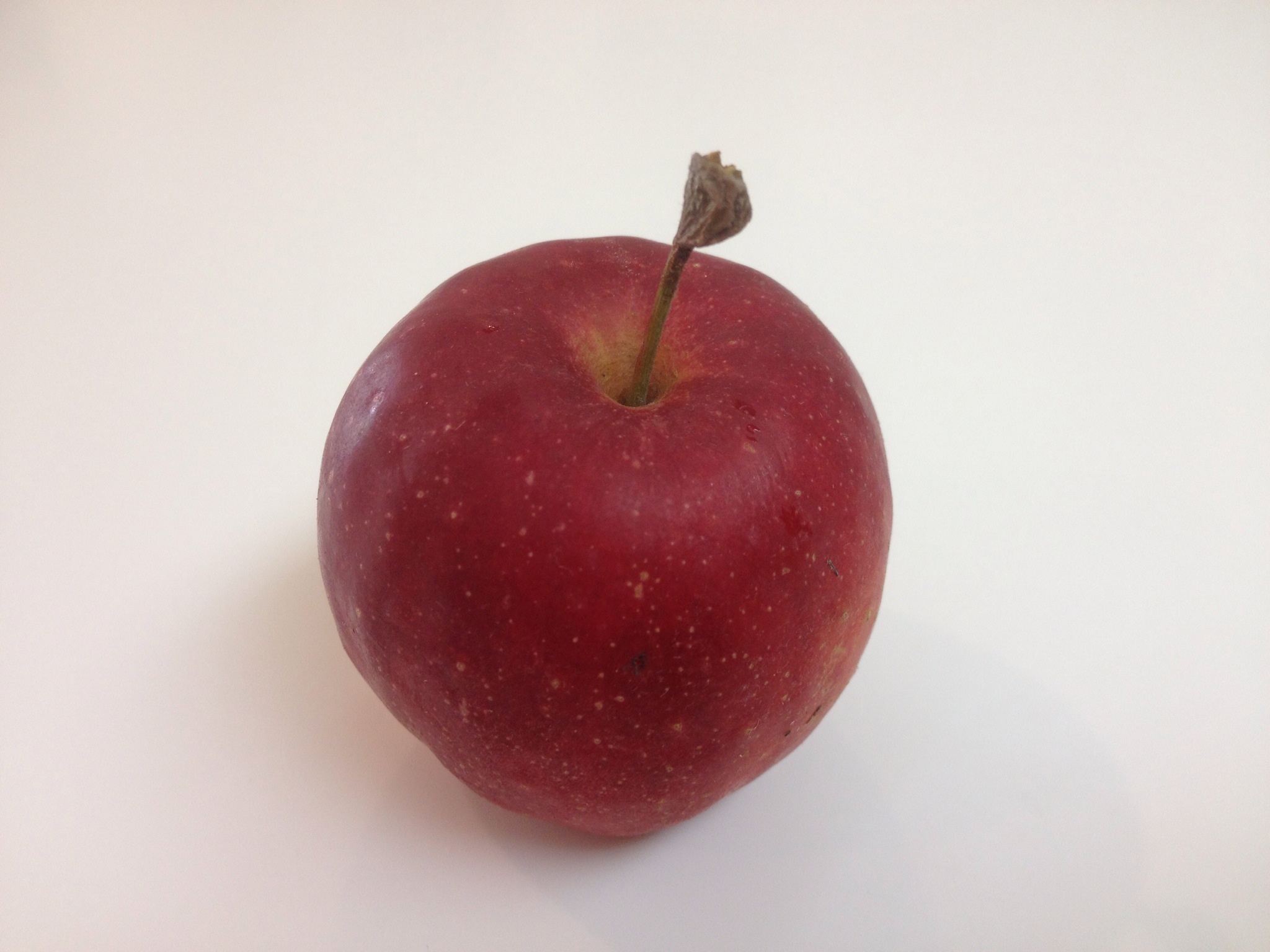 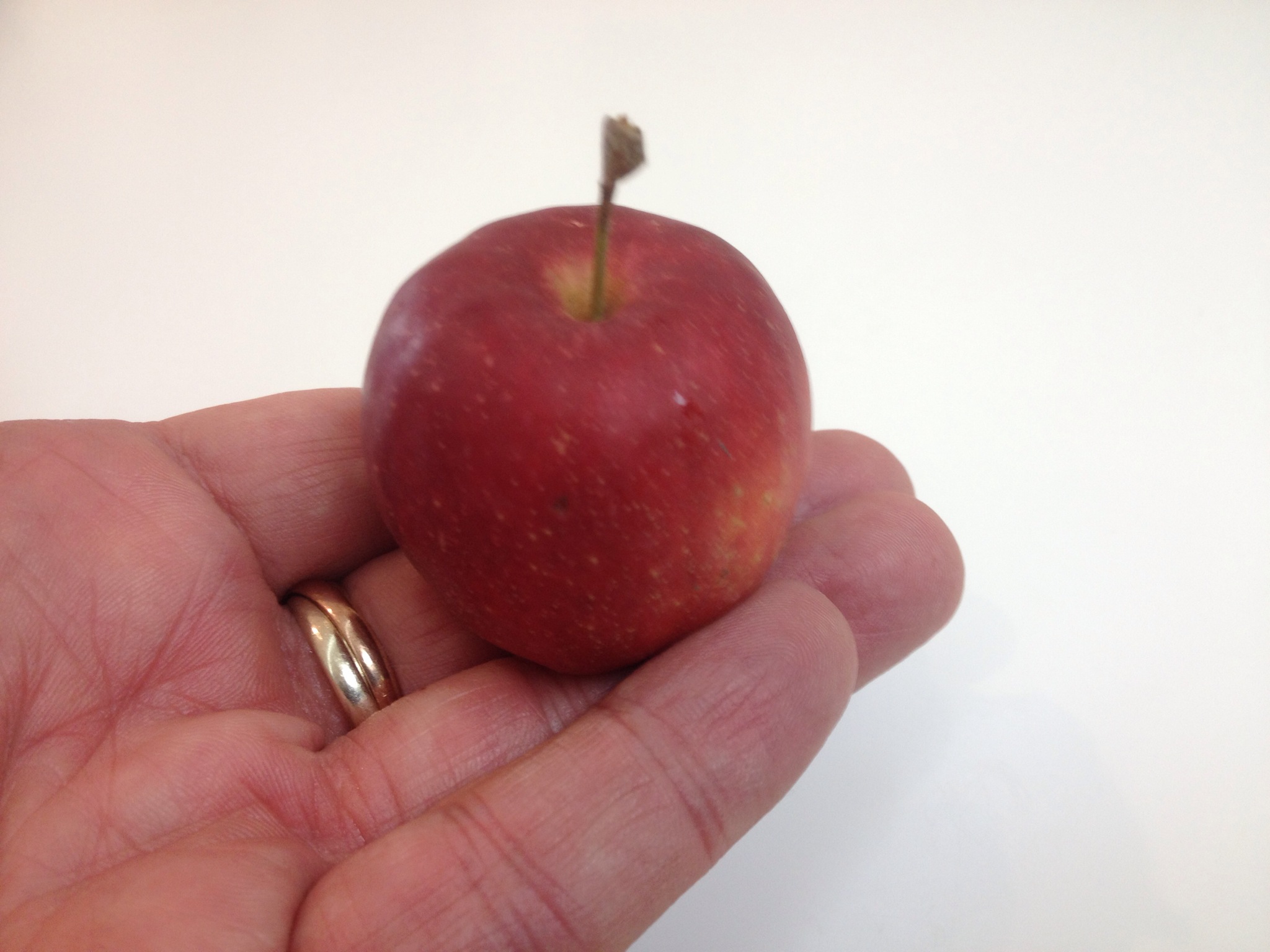 View from my table

I had only been to Dimibang once, and the dish was very spicy, so I’d been a bit hesitant to go back until I was at least willing to chance a fiery lunch.  Yes, yes, I know, probably not all their dishes are spicy, something I’m less sure of about all the restaurants with a large, bright red (cartoon) octopus above their entrances, but still…  Today, though, seemed like the day.  I had the same seat as last time, with a nice view out the door.

Our host was there again (I have to ask his name next time, he’s charming), and tried to give me the very limited English language menu, but I was having none of it:  pointing at the liquidy orange-coloured meal that the two ladies at the next table were having, I said ‘give me one of those please’ in my best (if limited) Korean.

Side dishes (and my rice bowl)

The dish was great!  The owner explained that it was a bean dish and not very spicy (indeed, even That Girl might like it).  The side dishes arrived very quickly:  a bit of jabchae (think a cold Asian noodle salad), a small omlette (not sure what it was made of, though), a bit of pickled chili peppers (they’re great, but hot) and of course rice and kimchee.

I nibbled away and shortly the Main Event arrived, a bubbling thick yellow-orange broth with vegetables and a few bits of meat in it (really few; I’m counting this as a vegetarian dish, thanks).  By “bubbling” I mean “rolling boil”… for once, you can actually see it in the photo. (Well, in the full size pic… just click on the thumbnail).  I eased backwards to protect my shirt.

I also had a small side plate, in which I mixed a spoonful of rice and several spoonfuls of the stew (I wasn’t letting that spitting, boiling bowl anywhere near my shirt!).  Tasty!  A nice bean stew, actually just the thing for a cold winter’s day — the owner even pointed out that not only was it very hot but that the heat was good for me.  Perhaps, but I’m definitely having it again.

When the owner asked how it was (맛있어요, “tasty”; my vocabulary is limited but very helpful in restaurants), I had him write it down for me:  비지 찌개, or Tofu Stew.  In the end, I cleaned my bowl.  Who know tofu could be so 맛있어요 ?  Heck, who even knew it was tofu?  (OK, everyone but me…)

After all the excitement on Sunday, we thought that an easy day on Monday might be called for.  Also, it was about time to let That Girl have a bit of a say in what we did.  I’m not entirely convinced that she’s as enthousiastic about Buddhist temples as Aingeal & I are.  So, we started at the Miraikan (the National Museum of Emerging Science and Innovation), out on Daiba Island.  In fairness, this sort of thing is always a lot of fun, so we were not exactly being dragged there either.

Our friends Andreas & Cristina and their daughter Josie had gone there, and recommended it as well, and told us how to get there on the (as Cristina put it) “Blade Runner style elevated railway”.  And it was fun, elevated, running on rubber tires instead of rails, great views of the skyline, the harbour and of course Daiba Island.

With a promise like that, and finding ourselves in the first carriage (this was luck: we were running to catch it!  I was sitting next to a bunch of gregarious Argentinians, hence all the Spanish in the video below.), I naturally filmed the whole thing, station to station to station… You’ll be happy to know that I have not put that all up (if you’re a rail buff, I could) but did post what I thought was the best leg of the journey on YouTube:

As we approached Miriakan, a camera crew were filming something (an ad?).  It was a bit surreal, as all was noticed at first were Japanese business men standing perfectly still for no apparent reason, but time revealed all.

Miraikan itself was a lot of fun.  I think everyone’s favorite is probably the giant live-action globe, made up of screens showing the world and its weather.  The other thing that we really liked was a mock-up of one module of the International Space Station, with several videos running telling about life there, including (as Aingeal put it) “the answer to every little boy’s first question”.  The video of a haircut was priceless!

Another interesting one was very large mechanical contraption with lots of little balls being shunted about.  It turns out to be a working physical model of how a router on the internet sends packets (say, one letter) from one place to another.  Reminded me of a YouTube video I saw of a (simple) computer built out of 10,000 dominos (warning: 22 minutes, but worth it on a rainy Sunday).

We didn’t go to the exhibition of their ASIMO robot — we’ve seen it on the news, and staying for that wasn’t as interesting as the exhibits themselves.  It’s hard to go on at length about a museum, and we took basically no pics… so On To Lunch.

After the museum, we headed into Tokyo Station for lunch and books.  Lunch, as it was a convenient time (we ended up in a nice little noodle place).

Books?  Well, I understood that Tokyo has more foreigners than Seoul… so more English speakers… so perhaps bigger, better selection of English books.  A sound theory, as it turned out.

Getting to a station at one edge of Marunouchi (the neighborhood around the Palace & the very-large Tokyo Station), we ran into The Problem In Strange Cities:  once up on street level, which way to go?  Having relied on the kindness of strangers, we headed off, detouring only to look a the Palace walls.  (You can do tours of the grounds; maybe next time.)  Eventually, we made it to Tokyo Station.  Which, like so many things seem to be “around here” is very big.  But we just cut through the corner on our way to the day’s Second Main Objective:  Maruzen Books, four floors of books across the street from Tokyo Station.

We no sooner made it up to the 4th floor (and I’d found the next three books in a series I’m reading, in the “new books” section at the entrance!), than a voice calls out “Peter! Aingeal!” …. our friends Bill & Helen from Seoul, also in Tokyo for Chuseok!  Bill’s the Australian Ambassador, and lives around the corner from us.  We had a nice chat, did our shopping and repaired downstairs for a drink and more chat.

After that, back to the hotel, and then on to dinner in the Shibuya area.

Aingeal was keen to see the “scramble” intersection at Shibuya — a large intersection that gets a lot of pedestrian traffic.  The foot traffic gets its own turn, and then everyone just, um, scrambles straight towards where they want to go.  A bit of a hoot, really, and you get a great view from the two-level Starbucks overlooking the intersection.

Then we wandered up into the brightly lit streets of Shibuya.  This was the third thing that reminded me of Seoul:  lights.  I think “Asian cities” are often depicted as using a lot of neon; that was certainly the case in Shibuya.  (In fairness:  keep walking, after a number of blocks, the neon disappears.  but still…).

Eventually we fetched up at Hanamidori, which managed to look tempting despite being 1 flight up (who’s their designer?  Hire ’em!).  In fact, it’s a chain, but a good one.  In fact, I found everything in Japan good, so that isn’t surprising.  Anyway, we had one of the house specialities, a traditional Japanese dish whose name escapes me (but those familiar with Hanamidori no doubt know it).  Again, reminiscent of similar Korean dishes, but at the same time completely different.

We had some appetizers, don’t recall what but very good.  The main course was a stew.  First the stew itself with condiments was brought out.  When it was good & hot (cooking at the table again), the maitre d’ / waiter / our cook served us each a glass of the broth.

Next there were some pieces of chicken in the broth.  We were served those as “yer man” got things really going, with a plate of chicken bits, a plate of ground chicken and a big bowl of vegetables & what looked like acorn jelly.  In go the chicken bits.

Next, he rolls the ground chicken into meatballs, and in they go.  And finally, in with everything else.  Now, sit and wait until it’s ready.  So, well fed and tired enough, we stroll back to the Shibuya metro and home…