Here are a few pictures from late April when the redoubtable Mrs. Kim, Elaine and I went shopping in Namdaemun market.

Mrs Kim (on right) with Elaine in background

our shopping being loaded up

On Tuesday last week, we went to the residence of Jasem Al-Budaiwi, the Kuwaiti Ambassador, for the last CQ event, a talk on IT games, particularly games played on “mobile devices” — smartphones and tablets.  Kwon Joon-mo, who gave the talk, has a game company.

Their latest game, Blade, is a big hit (the demo video of Blade that he showed us is on YouTube).  The talk started with a short video of Candy Crush Saga being played, and much of the talk was about the psychology of these games… why play?… including a very funny video of 10 reasons not to play Candy Crush.

It was a fun event, as always with CICI, but I’m not sure if this was such a wise idea to go as we’re now trying out Candy Crush Saga.  [Actually it is very reminiscent of other games that I’ve played, so I don’t think this will last long for us… famous last words?].

Here are links to some of the stories:

Anyway… thanks Jasem, and Jung-hwa & CQ!

This is a bit late, but back in April our good friends Andreas & Cristina visited us along with their daughter Josie (herself very close with That Girl, our own Fionnuala).  Among other things, we went for a weekend in Jeju Island, staying in Seogwipo City on the south shore of the island.  It was quite wet and, although the island is fairly far south, it was still pretty chilly, but we all had a good time!

On the drive down from Jeju City Airport to Seogwipo, we stopped off at Sangumburi Crater, an extinct volcano which now has a unique ecosystem.  The drive was OK, but we (later) found the west side of the island to be more interesting.  With the mist and humidity, the crater was very pretty but not very photogenic.  We had a nice walk around and peered over the crater rim into the mist…

Then on to Seogwipo City, where we’d booked into a nice hotel overlooking the town and port.  We walked around the port area, out to the pedestrian bridge to the island in the middle of the port.

The next day, we headed off to Sanbang Mountain on the southwest coast, and then on to visit Isidore Farm, in west-central Jeju.

There are a few things most people do at Sanbang Mountain:  visit the temple, climb half-way up the mountain to the old hermit cave, visit the Hamel Memorial.  We did none of them.  Instead, we hiked around the bay, enjoying the scenery, the fine weather.  OK, it was a bit wet and chilly, but very refreshing after all the dust and pollution in Seould.  And we’d dressed for the weather, for a change.

I got a big kick out of the Hamel Memorial. Hendrick Hamel was a Dutch sailer, one of a group of western sailors who shipwrecked there in the late 1600s, and the memorial is a (not quite full size) replica of their ship, the Sperwer.  The group were imprisoned and generally had a tough time of it until the survivors finally were able to leave Korea after around 10 years.  Hamel’s journal was the first western description of Korea.  Reading the description at the overlook by the road (see pic to the right), my only thought was “some foreigners were shipwrecked here and we were mean to them, but they got home in the end”.  Hmmm.  In any event, the monument was built by the Korea International Culture exchange Association and Dutch Embassy, and no hard feelings remain.

Then it was on to Isidore Farm, founded by Father P.J. McGlinchey, an Irish priest.  Father PJ has been on Jeju since 1953, and to listen to the tale, he built up Isidore by a series of lucky accidents.  Perhaps, but a lot of hard work and a good bit of “that vision thing” were also involved.  In addition to the model farm and horse-breeding, there’s a retirement home, a youth center, a children’s center, a hospice… It was very impressive, and we were honored to have had the chance to meet Father PJ.

Trying to make sure I’d found the right place before we left, I’d switched in Google Maps from the map to the satellite view. And there, seen from space, was a huge Celtic cross.  So we didn’t have any trouble finding the farm!

Fionnuala (on right) with a friend

Father Michael showed us around Isidore, including the small museum with its history, the horse farm, the Celtic Cross and then to see Father PJ.

At the horse farm, Richard Troughton showed us the horses, including a couple of orphaned foals that they were rearing by hand.  The girls got a big kick out of that (no, not literally!)

After the horses, we went to the Celtic Cross.  There’s walkway next to it with a series of statues of Biblical scenes (I forget if it’s actually stations of the cross, but that seems likely), and Fr. Michael managed to slip a lesson in when telling us about them (and he did it quite deftly and well, which was a nice change).  The cross is actually a large terrace where they can hold outdoor mass.  I thought it must hold hundreds.  Well, the Celtic cross terrace is on a hillside, and below the cross, half built into the hill, is a huge church that holds over 2,500 people.

Finally, off to see Father PJ, who told us some interesting stories of his early days on Jeju Island and also about what Isidore’s current project (a hospice).  It was very nice of Fr. PJ to take the time to talk to us.  After a good visit, we said our goodbyes.

After that, we stopped at the Osulloc tea plantation, and then back to Seogwipo.

Seogwipo is still a working port

That Girl and Josie

Cristina & the (back of) the temple

At the Celtic cross

On top of the Celtic Cross…

Richard tells us about their horse program

Fionnuala (on right) with a friend

Richard tells the other foal to behave

Statues that you see ALL over Jeju. Origin and meaning unknown, but even Irish priests have one or two of ’em!

We headed off today, Aingeal, Seamus and I, to Icheon (no, not Incheon, Icheon!), a big center for ceramics. Aingeal said she read that the clay there was particularly good for pottery, and so that’s how the ceramics industry there got started.  It’s a very nice drive from Seoul, only around 50 km south, or less than an hour and a half’s drive from here in Seongbuk-dong (more on the N. side of town).  The countryside, once you leave Seoul, is mountainous (they’re a bit big just to call “hills”) and heavily wooded — very pretty, a pleasant trip.

There we first went to a ceramics village in Icheon (the entrance is the big arch in the photo above).  To tell the truth, from the web there seemed to be 2 or 3 of them… not sure if this was “the” Icheon Ceramics Village, but there were a lot of shops, and some very fine ceramics. As it often is, a few of the shops were definitely a cut above the rest.

We walked around, and went into a lot of the shops, with set of dinner plates (and side plates too, hopefully) as our objective.  This is not a good country to be looking for this, as food is mostly served and eaten in bowls.  Still, it’s always good to have something you’re looking for, makes everything more interesting.

Eventually it was lunchtime, so we went to Chung Mok Grill, which was recommended by my friend Kathy Namovich (who also recommended Icheon).  There were a lot of people waiting, so it was over 30 minutes before we were seated… and that was at 1:30pm, very late for lunch in Korea.  Worth the wait.  We had 소 양녈갈비살 그릴정식, which Google calls “grill ribs seasoned small formal”.  Very nice, with a large selection of side dishes.  Seamus particularly enjoyed the grilled meat, the rice, some of the noodles and soup from the side dishes.

After that, it was back to Seoul!

2 very nice shops behind the pond

Lots of side dishes, natch!

Rain last night but it cleared up and left Seoul sparkling (no pollution, pollen or yellow dust) for Granddad Sesmus’s arrival this morning. Now we’re all enjoying the fine May weather: 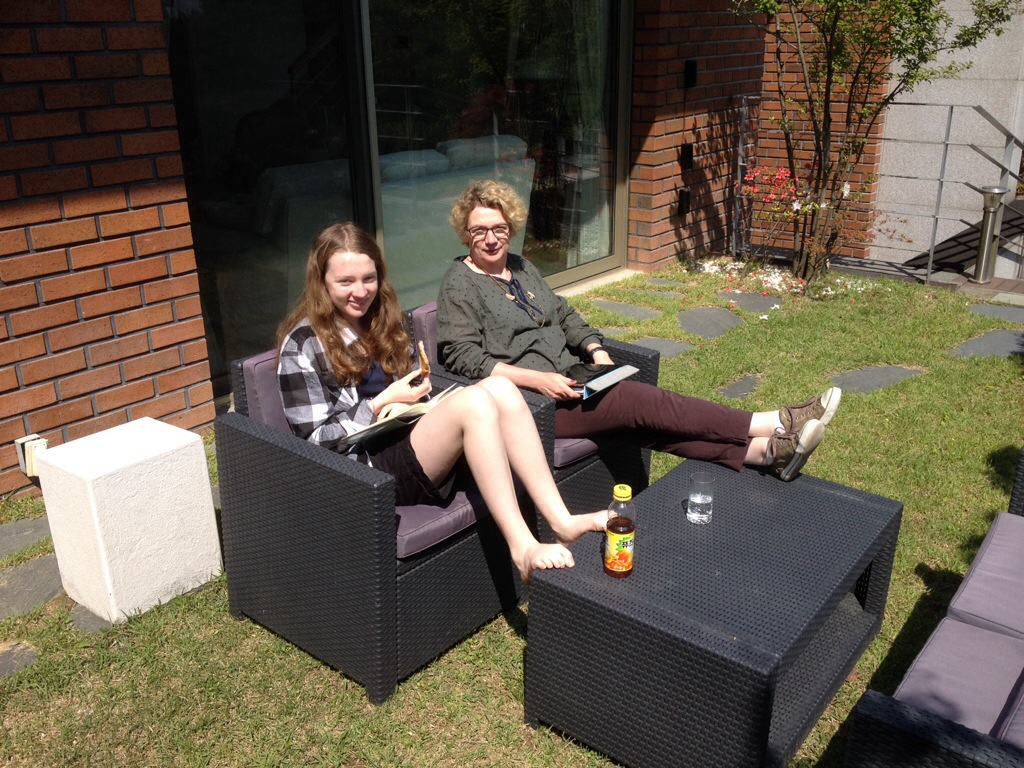 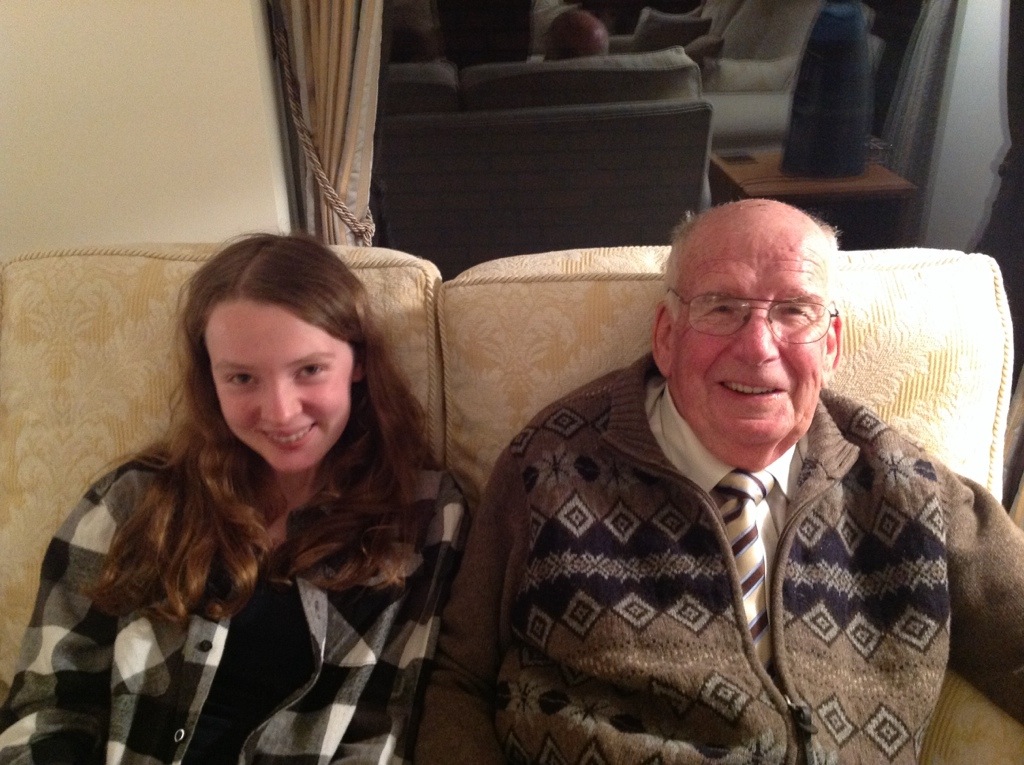