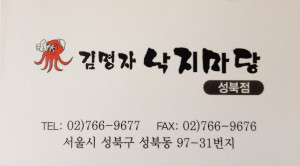 I’m trying to work my way through (most) of the restaurants in our neighborhood, one lunch at a time.  I’ve been to a few already, but haven’t written about them.  The Plan is to give a quick run-down on the restaurant and what I ate.  Today, I forgot to take a photo inside the restaurant itself, but did remember to shoot the food before eating most of it (not much point, later!).

Today, I tried out our local Hot Octopus restaurant, in the basement of a small office building on Seongbuk-ro, on foot around 15-20 minutes from the house.  Note that it is a 10-15 minute walk from our house down the hill to Seongbuk-ro (depending on your route).  So quite close.

I’ve seen a number of this sort of restaurant around town, and have been meaning to try one for some time.  I got there late, and the place was empty (Koreans eat earlier than I do anyway, but this was very late!).  A fair sized place, with a nice enough atmosphere, mostly the fake Korean-style tables, i.e. where it looks as if you’re going to sit cross-legged on the floor at low traditional tables, but actually there is a recessed floor under the table so you’ll get to sit as if in a chair.  But I had one of the three normal tables.

I was having trouble finding what to order from the menu (on the far wall) but the cook came out and told me what to have:  낙지볶읍 (nagjibokk-eum, fried octopus).  As has happened before, coming earlier or with more than just myself would probably open up other options (apparently a lot of dishes are only for 2 or more people).

As expected, nagjibokk-eum was a spicy octopus dish.  A large plat of it, served with rice on the side, a souffle and the usual several side dishes (today: radish kimchee, bean-sprout salad [2 of my favorites] and a pickle-like broth with what seemed like seaweed in it).  The waitress cut up the octopus for me (you can just see the scissors and tongs in the top-left of the 1st photo below), then the chef made another appearance, showing me that I should serve the octopus onto the rice and eat it like that.  While I had rather guessed that, it was nice of him to explain it.  I would have appreciated an explanation of the (pickled seaweed?) soup in my side-dishes.

from across the street

Had a great time yesterday. That Girl and I went over to see Terry & Sarah. Their daughter Caroline is just Fionnuala’s age. We went to the Museum of American Art / National Portrait Gallery, long one of my favorite museums but which I’ve not visited for a very long time. Lunch at the museum café, of course. Afterwards, we headed back to T&S’s house for long chats and a nice dinner. A fantastic day! 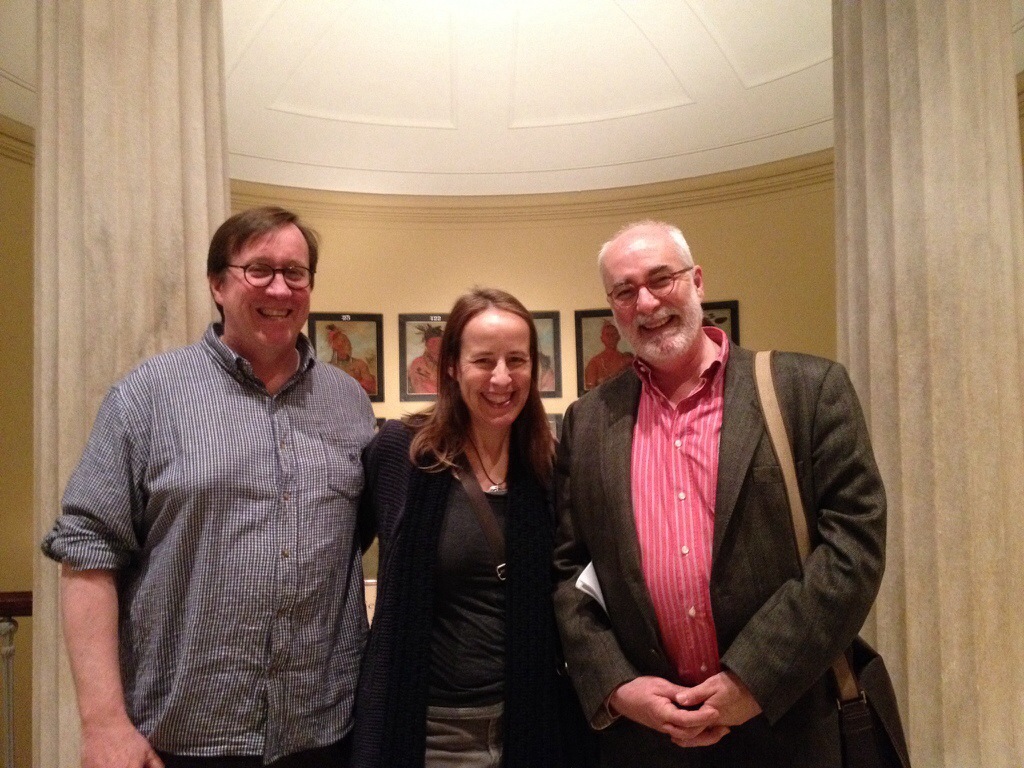 From the Korea Times, Wednesday 19-mar-2014, a shot of Aingeal and all the other female Ambassadors meeting with Minster for Gender Equality and Family, Cho Yoon-sun. 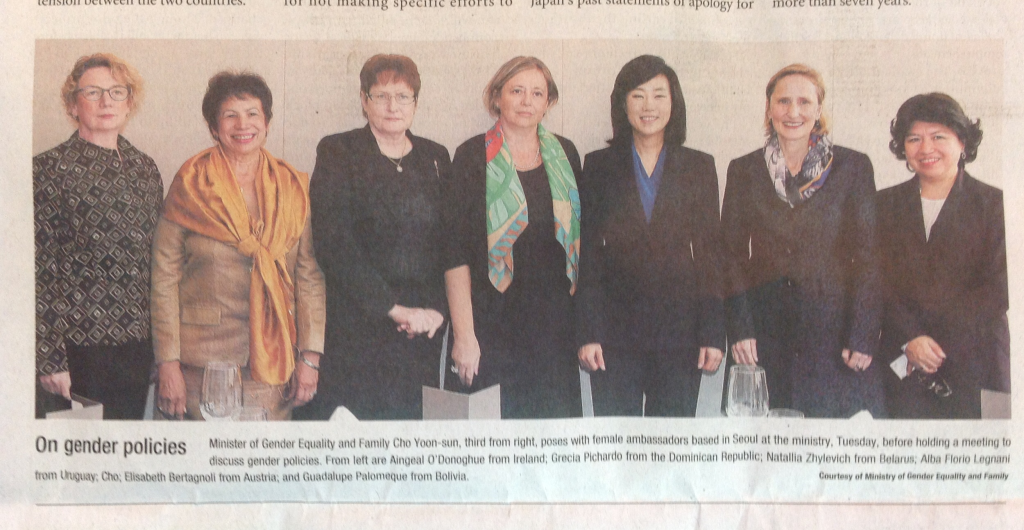 At last, an event actually on St Patrick’s Day!  Small, but a lot of fun with folks we enjoy spending time with.  (Hmmm…. don’t mean to imply we don’t enjoy spending time at other events!)  Anyway, here are a few pics and below that a clip of Aingeal reading “Old Father Gilligan” and a clip of the dancing that went on.  Father Sean is a great dancer!

Some pictures from the 2014 St Patrick’s Day Festival, at D-Cube Plaza in Sindorim.  A bit thank you to the Irish Association of Korea for organizing a fantastic event again this year!  Thanks also to Chairman Daesung & D-Cube Plaza!

Father Sean dancing with (I don’t know who)

Fionnuala (she was minding my Zoom H4N)