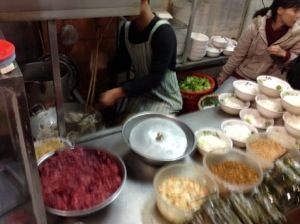 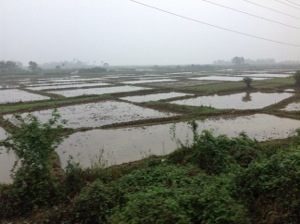 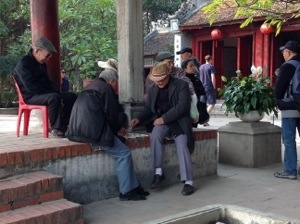 I see, already 15% of the way into it! that The Observer has a list of its choice of The 100 Best Novels of All Time. The real treat is the weekly reviews in The Observer, this week’s being David Copperfield. A. wonders about the overlap between their list and the SAT Reading List, which we’re working our way through.

A bit late posting this… some pics from when I stumbled across the First Korean Food Day, back in late October.  Bibimbap is a rice dish — a certain amount of steamed rice with various toppings.  Mix it up, add chili sauce to taste, and enjoy.  I’ve never had two the same; my personal favorite so far is definitely the versions of octopus bibimbap that I’ve had.

Anyway, I ran across it on Sejong-daero, the big avenue the leads up to the main palace, which is divided with a very large pedestrian area as the divider.  It’s also close to the Embassy (I often drive to the Embassy & take the metro or walk from there, depending on where I’m going.  If something’s happening on Sejong-daero (which in the fall seemed to be constantly), I’ll stroll over for a peek.

On the First Korean Food Day, there were many little tents around the side and in the middle a huge trough with the Worlds Biggest Bibimbap.  I had some, it was OK (or excellent, if we factor in how it was made & served).  Here are the pics… If you click on any picture, you get a full sized version with “previous” and “next” links.  As always, I don’t downsize the photos, so “full sized” may mean “loads slowly”.

I like this layout… good for when I have little to say.

It was a huge trough of bibimbap. How many did if feed, I wonder?

Off camera, we have the Palace to the left & the US Embassy to the right.

View towards the Palace. Oh yeah, there was music too!

Apparently they have to have public art on buildings here.  I have no idea of the rules – surely some minimum size to be obliged to get artistic, etc etc…

Love the back pack. 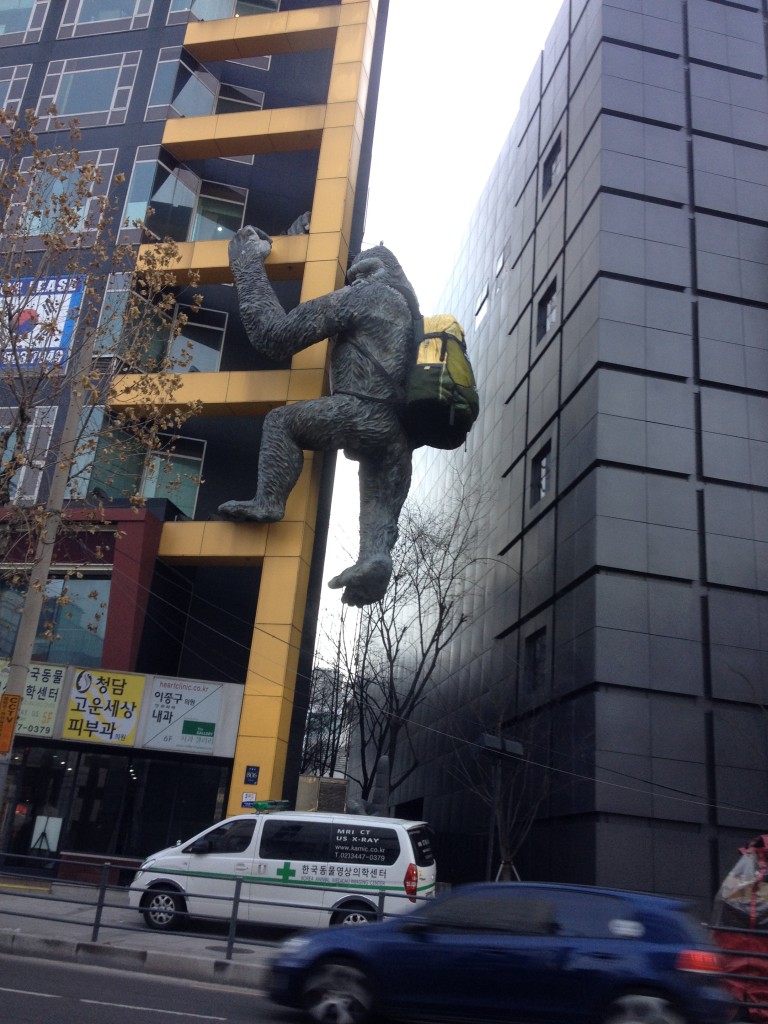 I had some free time yesterday and so instead of a walk on the treadmill or on the (treacherous when icy, as now) paths on the Bugak Skyway, I headed down to the Hyehwa Rotary and beyond into Daehakro.  It’s an area with, apparently, a lot of schools & an active night life.  There certainly were a lot of restaurants and so I had a very late lunch at a Vietnamese restaurant.

Anyway, I ran across Live Jazz Club, with shows at 7pm and 9pm. That sounded like a plan for the evening.  It’s only a 30 minute walk, and just as well that I did walk back, later on, or I’d have missed the statue of Rabindranath Tagore. Not sure what to expect, I got back there at around 6:45… the place was empty.  OK, 7 is a bit early (even if it’s a house band) but they serve food too and Koreans eat extremely early by my standards – with 4 years in Spain and 5 in Brussels, I’m not what you call an early diner.

Sure enough, though by 7:02pm the band had taken to the stage, and I was not the only customer (when the other fellow’s girlfriend joined him, we were positively a crowd!).  The band was pretty good — from my internet research as I waited, they are apparently all house bands here most of the time — first a piano / bass duo who were later joined by a singer.  At around 8 they took a break, and so did I.  The place would have had a nice atmosphere if full, but even with the 8 people who arrived as I was leaving, it was too cavernous.  But ye olde internett research had paid off, another place just a few blocks away…. something for after dinner.

This other place, Jazz Story, was perhaps badly named.  The band was just leaving for a break when I got there, but when they came back they opened with the Beatles’ “Obladi Oblada” followed by “Play That Funky Music”.  The crowd (and there was) loved it.  And cozy, too!  So I could have a nice jazz place… or rather I could pick between “nice” and “jazz”.  I stuck with this place.  In fact, there were only two songs that night that I didn’t know the lyrics to, and one of them was in Korean.  And, from the looks of things, I wasn’t the only one!

It was a fun place:  they’d obviously put a lot of effort into the casual clutter of the decor (see the panorama at the top of the post), right down to the “airplane” hanging from the cieling  It was fantastic — reminded me of the amazing merry-go-rounds that you’d see in Belgium, where they’ve jettisoned the traditional horses for wild, fanciful works of art made of iron and canvas, creatures, vehicles, sometimes things.

At one point, the waitress dropped a whole tray of glasses on my table (fortunately, mostly shot glasses, which a lot of the groups seemed to be doing a lot of) and I was very lucky with the bouncy / smash / splash, it all went away from me.  And I got a free pint of Guinness as an apology; nice to see that some people do know how to recover gracefully.

Eventually, it was time to go and I walked back.  It took longer, being later and colder and a 60 meter climb up the hill.  Next time, walk there & take a taxi home.