First… Although I work with IBM, the postings on this site are my own, and do not necessarily represent IBM’s positions, strategies or opinions. That said, I was in the office today in Gangnam-gu for the IBM Korea Finance All-Hands meeting, led by Joe Kern.

I appreciated the invitation, since my work at the moment is not actually related to Korea, and I really enjoyed seeing everyone and hearing the presentations even though some were in English & some in Korean… I got a bit more out of the former than the latter (though it’s surprising how much graphs & charts actually tell you even then)!

Here’s a pic of Joe — he’s a bit blurry as he was in action discussing IBM’s Smarter Analytics with us!

BTW, I took the metro there & back.  No question, it’s the better way to go.  With luck, driving might be quicker, but the metro is more certain and you can read.

Either way, you’re looking at around 45-60 minutes and just 12.5 km [that’s 7.8 miles] as the crow flies (or, I think, around 15km of city traffic “as the car drives”; no guesses on the length via subway tunnel), based on gmap-pedometer.com (click on the pic for a larger but still not terribly detailed version; I couldn’t zoom any any further and get it on the screen).

Very busy weekend. It started on Friday, with A. heading off to the Blue House to present her credentials. Just over a hundred days since we arrived, not too bad since they wait until there are a number pending before they schedule them all in one go. Afterwards, we had drinks at the residence for everyone with Ireland House. Both the presentation and drinks went well. 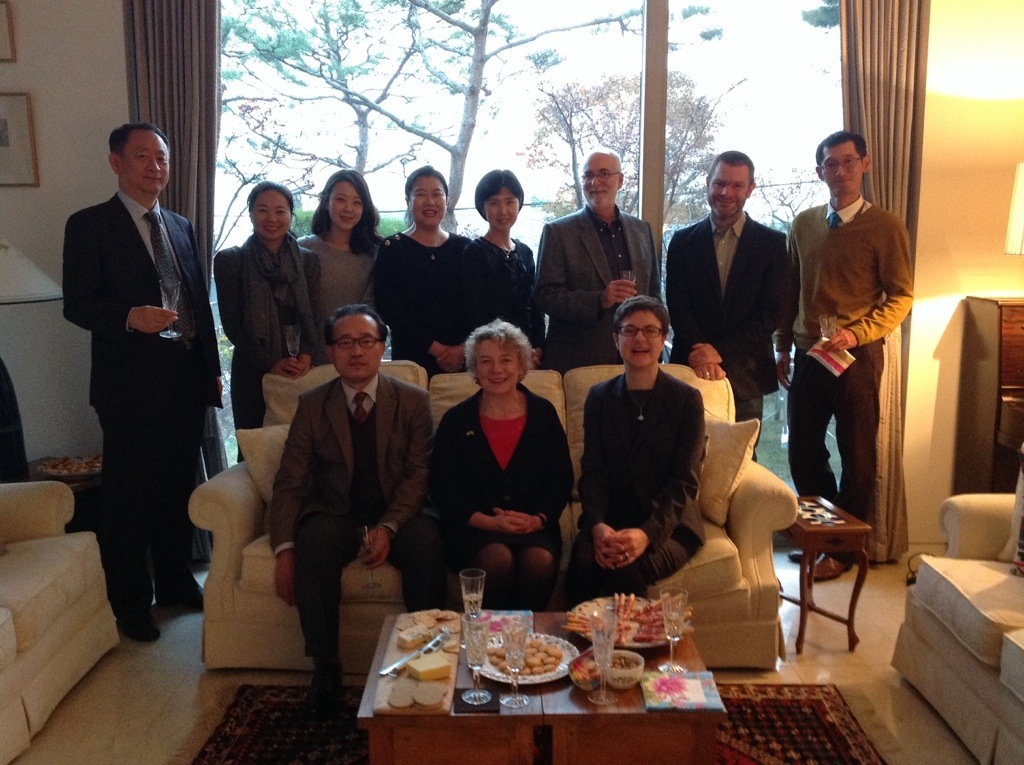 Saturday was Thanksgiving! Yes, I know it’s actually this Thursday, but when you’re an expat, the whole world doesn’t take a few days off for Thanksgiving, so it might move to a weekend. We normally use the next weekend, but next Saturday we’re going on the USO tour of the DMZ. We were 9 in all, but this year for the first time we opened up a teenagers table, for F., the teens of 3 of our guests, and any friends that f. Wanted to invite (1 of her 3 invitees was able to come). So 14 in all. The redoubtable Mrs. Kim made pies on the Friday, we made the stuffing together (well, I made the stuffing but Mrs. Kim & Elaine helped with the prep.

Cranberry sauce was already made, using Joyce’s ginger cranberry sauce recipe (and she’s right, BTW, cranberry sauce is dead easy). Curiously, for the first time ever the sauce set almost instantly. As I had not expected even to find cranberries, I didn’t quite know what to say. Anyway, pecan & apple pies (2 each) done. Saturday was the turkey, finish the stuffing (don’t put in that raw egg until you’re about to cook it!), green beans with toasted lemons, sweet potato with ginger, mashed pottoes, green salad, a couple of baguettes…

Invited for 7pm, the guests mostly stayed I until midnight. A great evening, but sad to know already that some of our new friends will have moved by this time next year. And, after 5 Thanksgivings in a row with Andreas & Cristina (and Josie, of course), and now without them, it suddenly reminded me that we really have left Brussels. But it’s always about friends & family here and not here, isn’t it?

AnywY, then tonight we were invited by the Wightmans to “a Night of D-minor Concertos”by British concert pianist Peter Donohoe at the Sepul Art Centre Concert Hall, with the Ewha Philharmonic Orchestra. Wow! I normally fall asleep at classical concerts (going straight into REM sleep) but this kept me awake, between the superb performance and (for me) nice selection of music.

So… A busy weekend.

This is the actual text of an email from my daughter’s school last week.  I later learned that there were several such incidents — which all made the news — in Seoul that week.  So not as unusual as all that!

There was no word as to the fate of the pig’s carcass — enquiring minds want to know if lunch (somewhere) was a pig pickin’ the next day!