For the past while, I’ve been seeing enormous queues (see above) on the big road at the bottom of our Hill (yes, it is is a Hill not a mere hill), and learned that the object of desire was the Gansong (간송) Art Museum.  Internet research reveals that the museum was founded in the 1930s by Gansong (pen name of Jeon Hyeong-pil), who bought up classical Joseon-period Korean art to keep the Japanese from taking it (an approach that reminded me of the Nature Conservancy).

Why the queue?  The museum is only open 2 months a year, October & May.  And it’s phenomenal.

looks to be purpose-built in the 1930s, with a small exhibit hall on the ground floor, and the 1st floor almost entirely taken up by a large hall filled with display cases.  Very nice building – the large windows gave a nice airy feel, and let in lots of light for looking at the drawings.

The collection itself is larger than what was on display — looking through the catalogues, earlier years had pictures that I’d definitely not seen.  But what was on display was more than enough!  A bit overwhelming, actually.  A lot of people were buying not just this year’s catalogue but every year that was still on offer.  I bought 2013 and 2009.

The art was all traditional Korean ink-on-paper, with a mix of themes (landscapes, people, animals).  From the dates of the artists’ lives, most of the collection was from around 1700 to 1825.  One piece that I particularly liked (and was able to buy a print of) was a landscape with women doing their toilette, which was very reminiscent of similar pictures in Europe that I’ve seen.

The grounds were very nice, though we could only stroll around the main building.  There were a number of interesting statues dotted about, including one of the eponymous founder and an interesting Buddah.  Here are the other statues, since I couldn’t take pics of all the artwork inside:

I was strolling home, after all that, and found myself in front of Chocolate con Churros, a churreria in our neighborhood and probably the only one in all of Korea.  What to do except go in and place the obvious order?  Surprisingly good, and fairly authentic, although they didn’t speak any Spanish.  I loved their business cards, which are designed to look like a Madrid metro ticket, ha ha! 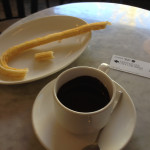 The Gentleman Who Lunches has gotten his E-7 Sojourn, or “permission for engaging in activities not covered by the status of sojourn”, a.k.a. permission to work.  Main offices are in Gangnam, on the south side of the Han River, a good 45 minute commute from home.

While I’ll be working from home a fair bit of the time (think “early morning & late evening calls to the US and Europe”), I will also be going to the office sometimes as well… so, here’s looking forward to some Gangnam Lunches!  Either way, this promises to be an interesting experience. 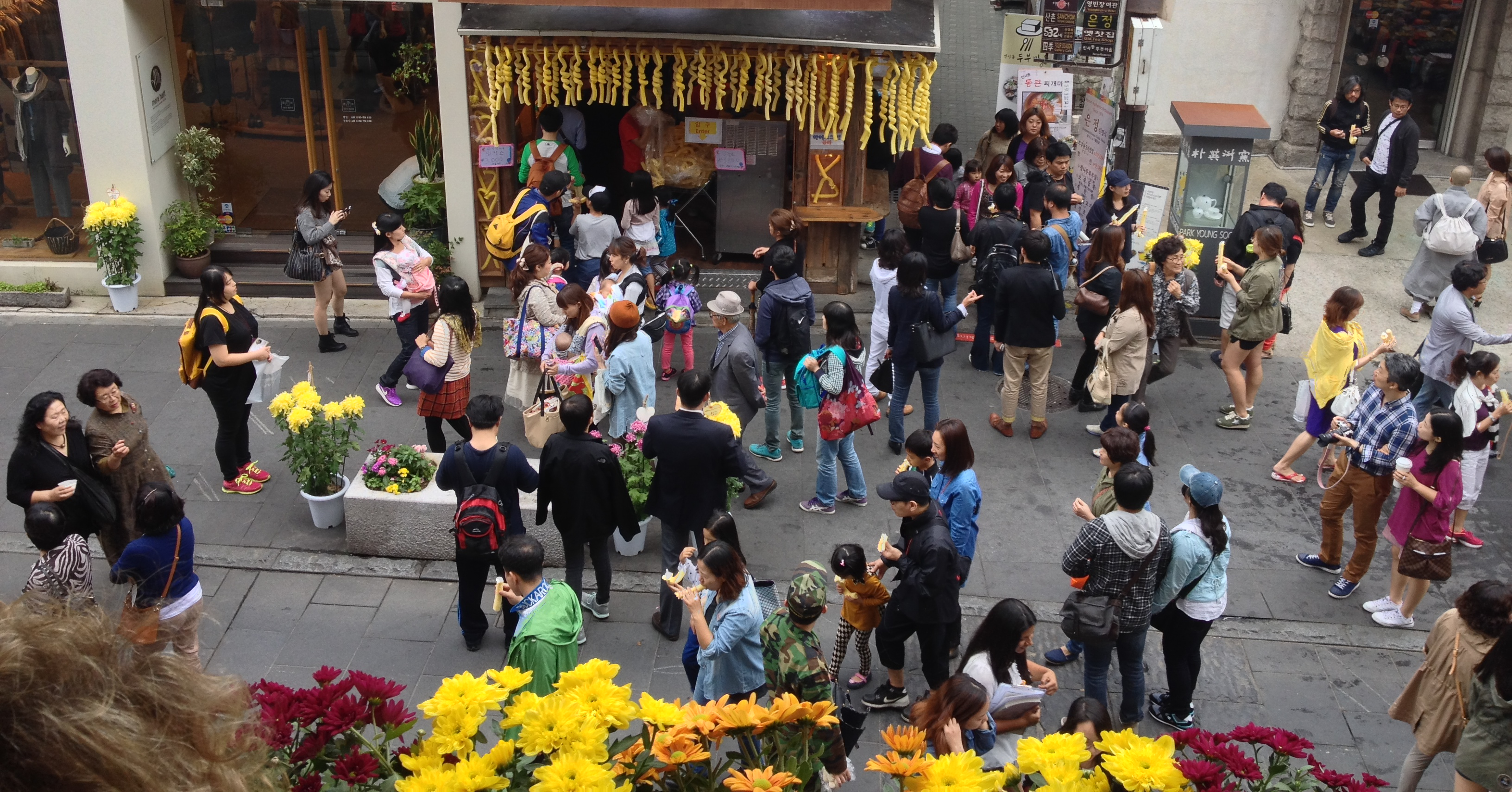 On Saturday, 28-Sept, A. and I went for lunch in Insadong, a neighborhood in Seoul, with our Korean teacher.

We started out at a place which, she said, was frequented by older Koreans as it was more traditional.  There we had galbi tang (갈비 탕) and chicken ginseng soup (samkyeh tang 삼계탕), both of which were lovely.  The chicken soup has a whole small chicken in it, simmered until the meat is falling off the bone, a characteristic it shared with the ribs.

From there, we went to a place that specialized in dumplings in the style of northern Korea.  Like the first place, it’s apparently been around since the year dot.

Here, we shared Seafood and Green Onion Jeon (헤몰파전 [spelling?]) and Gaeseong dumplings (개성만두씸).  There was a queue to get in , for good reason, and in the window you could see dumplings being put together.

After that, we really didn’t have room for any more food!  So a stop at a nearby tea-house, where I had lovely pomegranite tea (easy choice for me) and A. had five-flavour berry (오미자) tea, which was super (she later bought some berries, to try making it at home).

The teahouse was one flight up (1st floor to Europeans, 2nd floor to Koreans and Americans, and just confusing to poor old me), with a view onto the main street in Insadong, and of the wierd ice cream shop (see the banner above).  The cones are corn cylinders, open at both ends, that are filled with ice cream.  F. had some in early August (shown here).

Aside from being the coldest icecream that I have ever tried, the basic design is like a disaster waiting to happen when inevitably A Small Child gets their hands on one.

Then we bid Diane goodbye until the next class and it was time for wandering and shopping.  Not much shopping was actually done (I did buy 1 Xmas present).

While we knew that Insadong was having a bit of a festival that day, we didn’t expect to come out of one shop to find a traditional drum parade coming down the street to us!  Here are a few very short videos of the parade.  In the 4th video, the streamers that the drummers are twirling are attached to the tops of their heads.

I was on a quest to find a somewhat larger pan in which one could cook (poach, ideally, but bake would do) a whole salmon, and ended up at Namdaemun market. Where I’ve been before, most recently in fact the day before to buy the &!@#% salmon, but today turned out very nicely ere. No, I didn’t get the pan (found one, I think, but too late, and anyway I need to measure the oven first and check with the redoubtable Mrs. Kim that it’s deep enough).

Anyway, the search, like all good searches revealed a treasure trove of other things, including a lady selling around 15 beautifully rip figs for 10,000 won (around 7 euro or 10 dollars, which seemed a good price for the gems. Any country that grows figs has clearly got some of the basics right. Now, figs and mangos… You’d really be talking. I live in hope.

I also found a place that sells candles. Not that you can’t find candles… Just that your basic tall thin dinner-table type candle has been conspicuous by its absence. Tea-light candles, any number of wide candles, but not candles, if you follow me. But entering a building more-or-less at random, there they were. And a few stalls selling them too. Nothing like choice. So, a small but unexpected win!

I also bought a set of Korean chopstick/spoon sets. Curiously the residence has none; probably (as I’ve just done) our predecessors bought ones that they liked for themselves and kept them. Not really needed for entertaining, after all.

All that was followed up by a nice bulgogi 분고기 at a teeeeensy little restaurant in a narrow little alley full of other miniscule restaurants. Mine probably sat 24 people in what seemed like about as many square feet (probably was 3 or 4 metres square).  The street’s layout is:  alley in the middle, then the kitchens on the “outside” of the buildings, and then the dining rooms.  Bit different than I am used to, but being able literally to see what’s cooking does help choosing which restaurant!  Nice meal, the omlette was a surprise but tasty.  BTW, the toilet paper is for use as napkins, which is apparently fairly common in such places.