I’ve been walking F. down the hill to the bus stop.  It’s not very far, but it’s a pretty steep hill and all the walking up & down is doing me a world of good.  Lately, I’ve been extending it up to the top of the hill, just a bit above us, and doing a circuit of the Lotus Pond park. It’s a lovely little park, nestled into a ravine.  Presumably it’s a park because it was just too damned steep to build anything — I suspect that’s true of many of the little green oases around the city, which seem generally to be on hills. 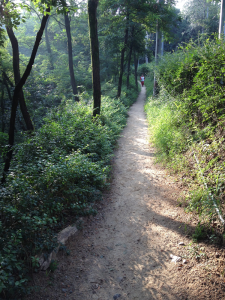 It’s also the beginning of an very good walking path along the Sky Way, a road that snakes its way along the top of some of the hills that run through the north of Seoul.  OK, if you know the area better that’s probably not a great description but it’ll do for now.  I’ve walked on that for a ways, in the morning, and it’s a pleasant mix of bike-path like surface, boardwalk, rubberized (strips of tires in a latice as a walking surface) and plain old dirt path.  Ignore the road next to you & the occasional view across a mega-city, and you might feel for a minute that you’re in the country. Anyway, the Lotus Pond park.  The main part of the park is in a figure 8, with the cross-bar of the 8 running down the center of the ravine, with two loops going along & down the sides to join up at the bottom (of the park! the ravine continues).  Like the Sky Way trail, there are a lot of old people taking their exercise in the morning, although these folks in the Lotus park seem generally a bit older & frailer than those striding along the Sky Way trail.  Now that I’ve been there several times, a few people have said hello (an yaeng ha seh yo) to me. 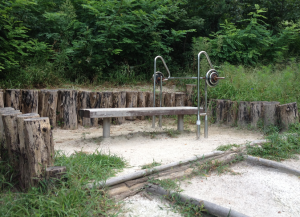 There’s a lot of exercise equipment around generally in both places, but more in the Lotus park, I think.  Some I haven’t seen in public places before, like one for lying on a board, hitching your feet under a bar, and flipping the board over so you’re upside down. Seen that in a gym, but never in a park.  Don’t think you’d see that in Dublin… the barbell would disappear instantly. 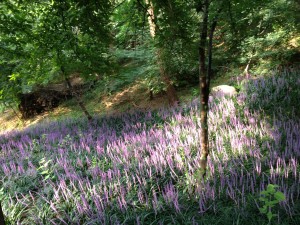 It’s a nice time to be walking there too, the late summer, with so much in bloom.  There are huge numbers of these little purple flowers, kind of like.. well, I’m not very good with flower’s names!  Here’s a closeup if you’d like a look.  It’s lovely and cool under the trees — and very humid near the stream — but some of the flowers are also in the sun (those don’t look as happy). 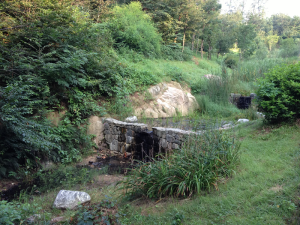 The walk back up the center of the ravine is very lush, with a series of little ponds behind tiny dams trickling down the hill.  The way you’re down below the streets above, and in fairly dense trees, you can’t hear anything.  Unlike the Sky Drive, you really could just lay down on the grass and let the world go by.  At the top, there’s exercise equipment and the OAPs, but except for a few school boys and one other man, I don’t think that I’ve seen anyone (or at least very few people) walking through the park proper , except on part of the higher paths that cut through from the bus stop to some apartment buildings.  Yer man just strolls the figure-8, that I can tell… he’s there when I arrive (already 25 minutes into my walk) and is still strolling when I finish.

I was exploring one of the neighborhoods near us, the area around Sungshin Women’s University metro stop, to which we can right a handy bus.  I was particularly looking for places where I can do a bit of foodshopping, as all that I’ve done so far has been in large stores, either the huge HomePlus at Yongdu metro or the also-huge LotteMart at Seoul Station.  We were taken to the former, and then I checked out the latter as it’s on a straight metro ride from our closest station.

Both are nice in their own way, and on my second visit to LotteMart, I successfully sourced clothes-pegs, 2 square jugs (with lid) that fit in the fridge door and a weighing scales.  I know that with scales “it’s not how much, it’s the direction that your weight is moving”, but it was cheering to find myself 4 kg lighter. 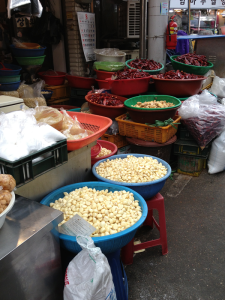 Anyway, time to explore the neighborhood a little bit.  So a quick recce before catching the 1162 home from Sungshin Women’s U station (are the many “Women’s” universities I see around Seoul really still only for women?).

Quite a lot of shops, everything from Adidas and Abercrombie & Fitch to innumerable restaurants (a fish place looked interesting, as did one specializing in Bulgogi & Noodles, and another called “HOT” which seemed to have only pictures of octopus in chili sauce… but I digress) to the inevitable & numerous coffee shops to.. Donam Jeil market!  and the lane running parallel to it.  Now we’re talking… shops with very fresh fish of all kinds (often unfamiliar to me), vegetables, fruit, kimchee (many kinds, have their own shops), etc.  So we – or at least I – am looking forward to shopping a bit more locally in general and in particular until I can drive here.

My favorite was one that sold garlic, chili and very little else — a bit of ginger, some dried beans I think.  As the old Little Tavern chain used to say, “Buy ’em by the bag!”

It’s a seriously long and steep hill that we live on. All of Seoul is on hills – heck, there are mountains inside city limits – so it’s not like this is unusual except to me. I commented to A’s driver that there are a lot of tunnels in Seoul (i.e. through all those hills!) he said “thousands”, not the 000’s I’d been thinking of. So, hilly, eh? 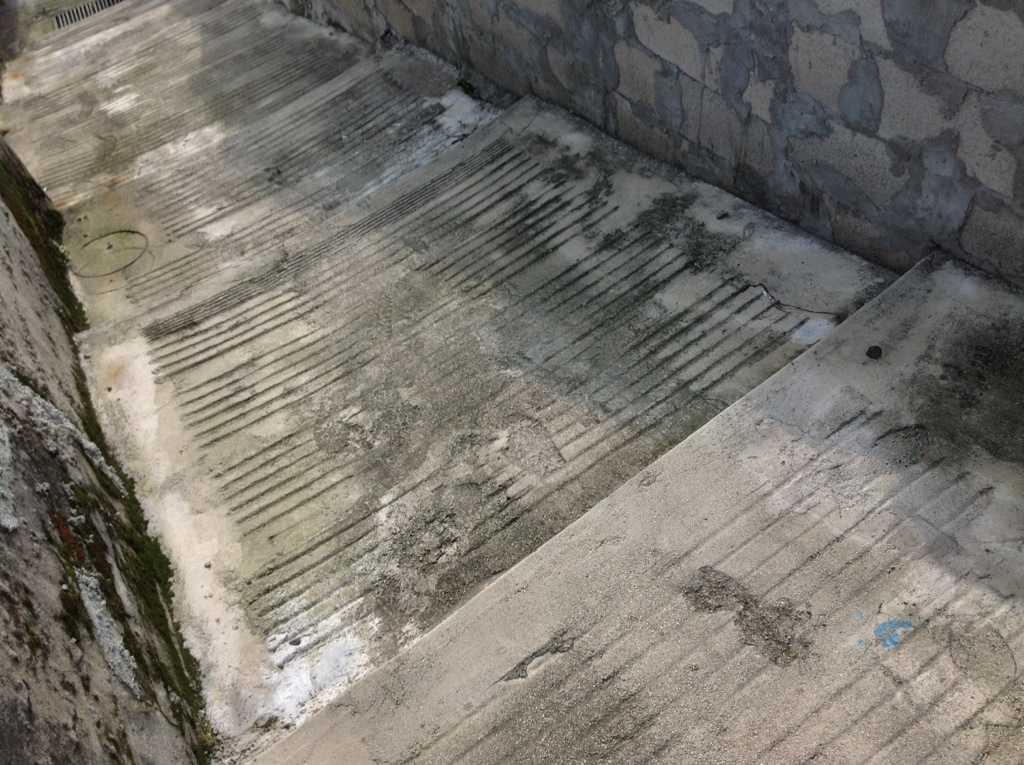 Anyway, on her second day at school, I picked up F at the bus stop. Walked down a bit early, allowing time since I’d not done the walk. The cool bit was the map that the Bus Coordinator at SFS sent me… not just the streets, nor even the alleys, but the narrow pedestrian cut-throughs too. I just nearly typed “700 meters flat” except it was far from flat…

So down I go & had a bit of a walk around when I got there, thinking about poor ol’ F trudging up that hill. 12 mins down (22 back up as it turned out). Trish says “sure it’ll be good for yer thighs” yah thanks Trish. 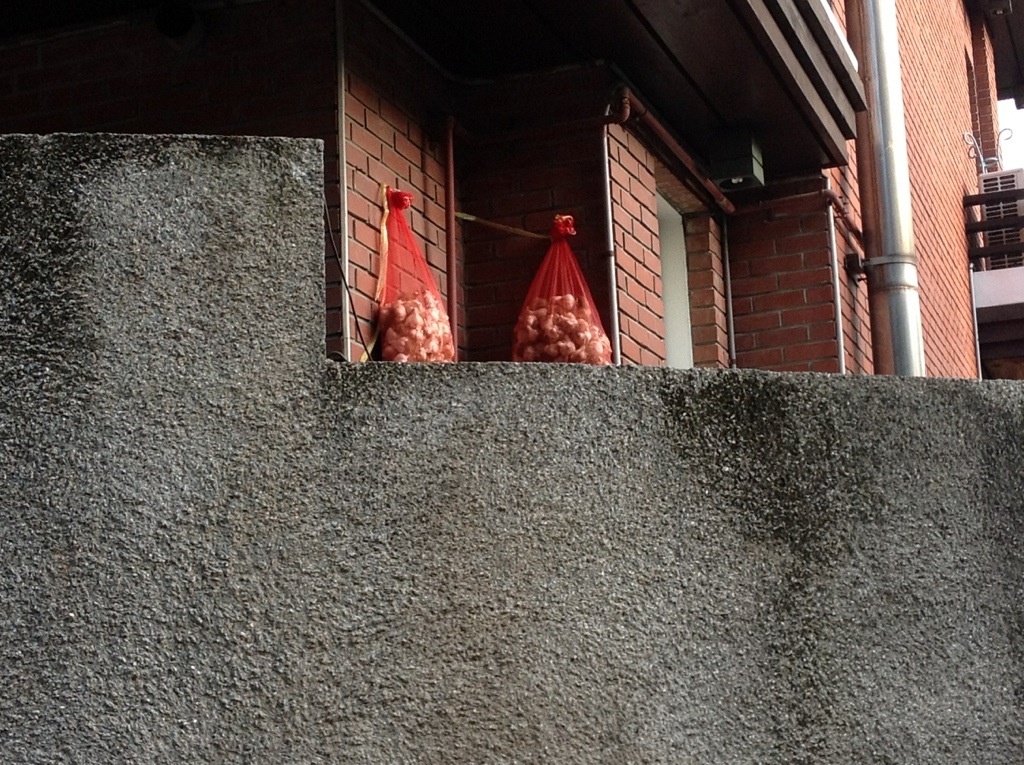 But it is an interesting walk. Views over bits of the city, into people’s porches, of their front steps, sometimes of their rooftops… But I have to work on this whole hill-walking thing…

I started this on the day after we landed…  was interrupted less than a paragraph into it, haven´t gotten back to this blog since.  It’s been a week (!), but here it is, with a bit of an update.

We landed at Incheon Int’l Airport at around 14:00 yesterday. It was a pretty good flight. KAL gives enough legroom, which was a nice surprise, and we all got a decent bit of sleep. Ruth & some of the Embassy team met us at the gate, and we headed into

Well, we headed into Seoul, directly to the residence.  It was all kind of surreal, as things often are at that point, but the house was great — nothing the way we (or at least I) had pictured it.  Didn’t feel like “our” house, though, as we then turned around and went to the Somerset Palace Hotel, We stayed there from that night (Thursday the 8th) until Friday of the next week, when we moved into the residence.

The Somerset was a nice place — serviced apartments, 1 block from A’s office, close to the government district, to the Palace, to the financial district.  I’m not really sure where the time went from then until we moved in —  getting F ready for school, actually going to the school, some dealing with Sophie The Cat and her epic journey here, maybe a bit of shopping.

But the time did go, and quickly.  We moved into the residence yesterday (air shipment arrived & the painting was done 2 days ago) and did a Big Shop after leaving the Somerset & actually moving here.

Does it feel like home already, or is that just relief at not having to packup yet again?

Between being in transit and staying at my father-in-law’s wifi-free house (always nice otherwise), don’t hold your breath for any news.