On Saturday, I joined CICI for a day-trip to the Hangwa Cultural Museum (Hangaone) (한과문화박물관 한가원) [Gmap link] and the Pyunggang Botanical Garden (병강식물원) [Gmap link].  They’re quite close together, around 55 km north-east of Seoul.  It seemed a fairly rural part of the country, and again I’m struck by how densely forested Korea is now.

Display of 5 main types of HanGwa

The Museum is dedicated to “HanGwa”, a traditional Korean sweet.  First, we watched a couple of short videos about HanGwa, and a short talk by Kim Gyuheum, the Master of HanGwa.  We were offered a bit of tea and some HanGwa to sustain us during the videos; well begun is half done.  There are two basic kinds of HanGwa, and, of the type he makes, over 250 variations, of which Mr. Kim has mastered 170.  Next, we had a tour of the museum, which was very interesting, followed by the main event: making HanGwa.

The sweet is made from rice flour, which comes in hard, pressed little sticks, about the size of a piece of Trident gum (I think my audience will understand that ;-)  First, the stick is dropped into oil at 100C and then is transferred directly to a vat of oil at 150C.  The first bath softens up the HanGwa, and if puffs up a bit, but then in the second bath it blows up like a balloon.  In turn, we were taken to look at a demonstration of cooking HanGwa.  Indeed, the process must be correct:  just 100C isn’t enough; just 150C even worse (like the lonely HanGwa stick in the middle photo below – it never had a chance).  Letting the HanGwa cool is a bit better; but, as predicted, only a quick transfer from 100C to 150C will give the desired result (as in the 3rd picture).  How, traditionally, did they know it was 100C & 150C?

After it’s cooled, the HanGwa is dipped in a sweet rice syrup, and then rolled grains of various kinds, for the outside coating.  After the HanGwa is coated, you roll it gently between your fingers, to press the coating into the surface.  That coating gives the HanGwa it’s texture, color and a bit of a different flavor.  If you want, you can then add a dab of syrup to stick on some decoration.

Rolling after dipping in grains…

Up in the workshop, we were divided into three tables, where we did the last step, dipping & rolling the HanGwa.  We had white, green, yellow and pink coatings to work with.  We all tried one- and two-coloured hangwa, but I also went for a three-color “Irish Flag” HanGwa (it came out, so I stopped while I was ahead).  It was a lot of fun, and not too much fresh-made HanGwa was eaten in the process ;-).

A few awards were given out, and then we headed off to lunch.  Lunch was very good — it was my favorite: a good selection of side dishes, with whatever the main course happens to be (a spicy fish stew, in this case).

Certificate awarded to one of the participants…

On to the Gardens!

After lunch, we went to the nearby Pyunggang Botanical Garden.  It’s divided into a 12 pistes; we did a short circuit of just 3 or 4 of them:  the Alpine garden, the

Pond at the start

Azalea Garden, with our guide

Ajumas (Grannies) on an outing

Map of the gardens

Gavit Island & a couple of scenes from the evening. A longer post forthcoming … 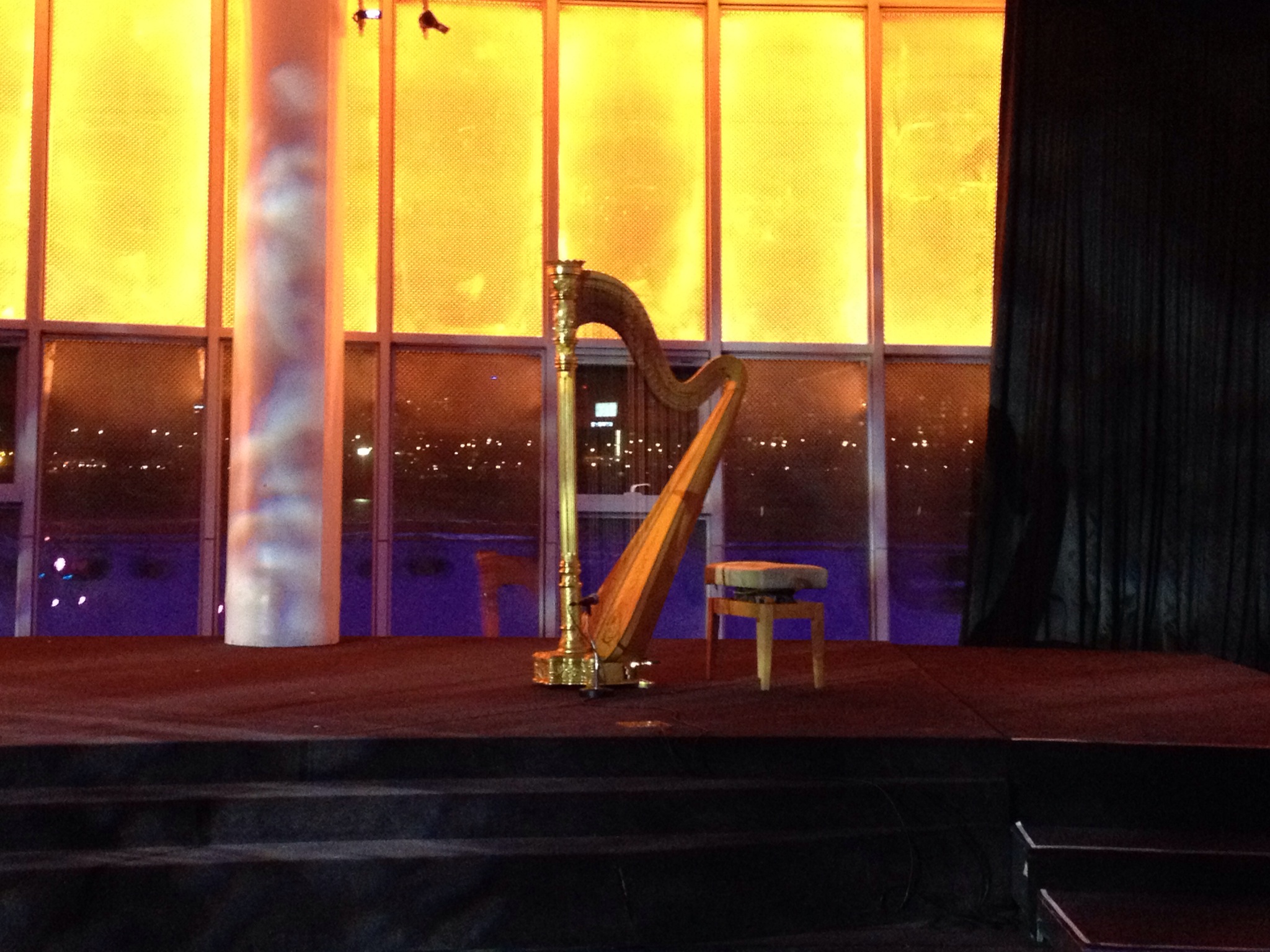 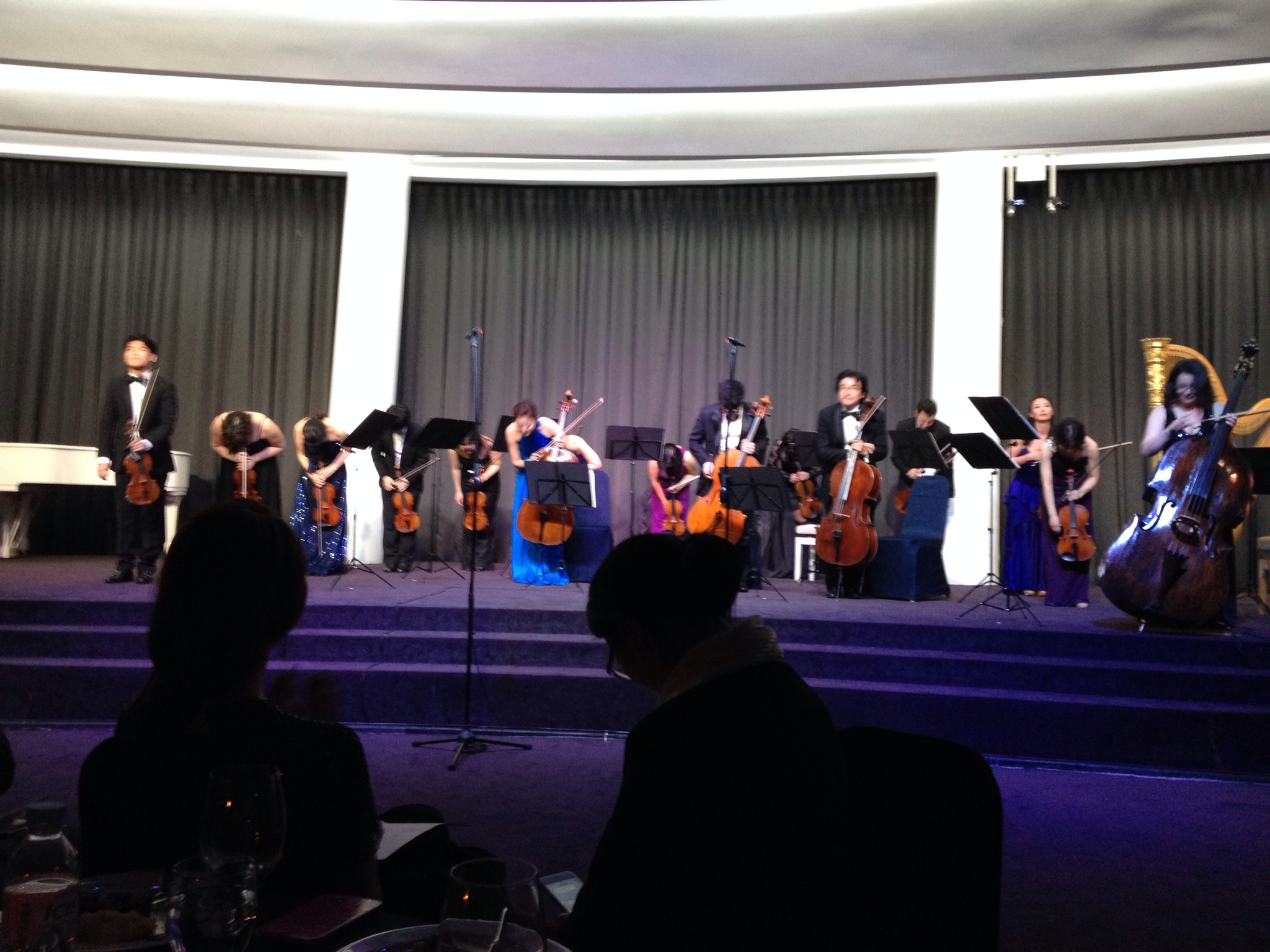 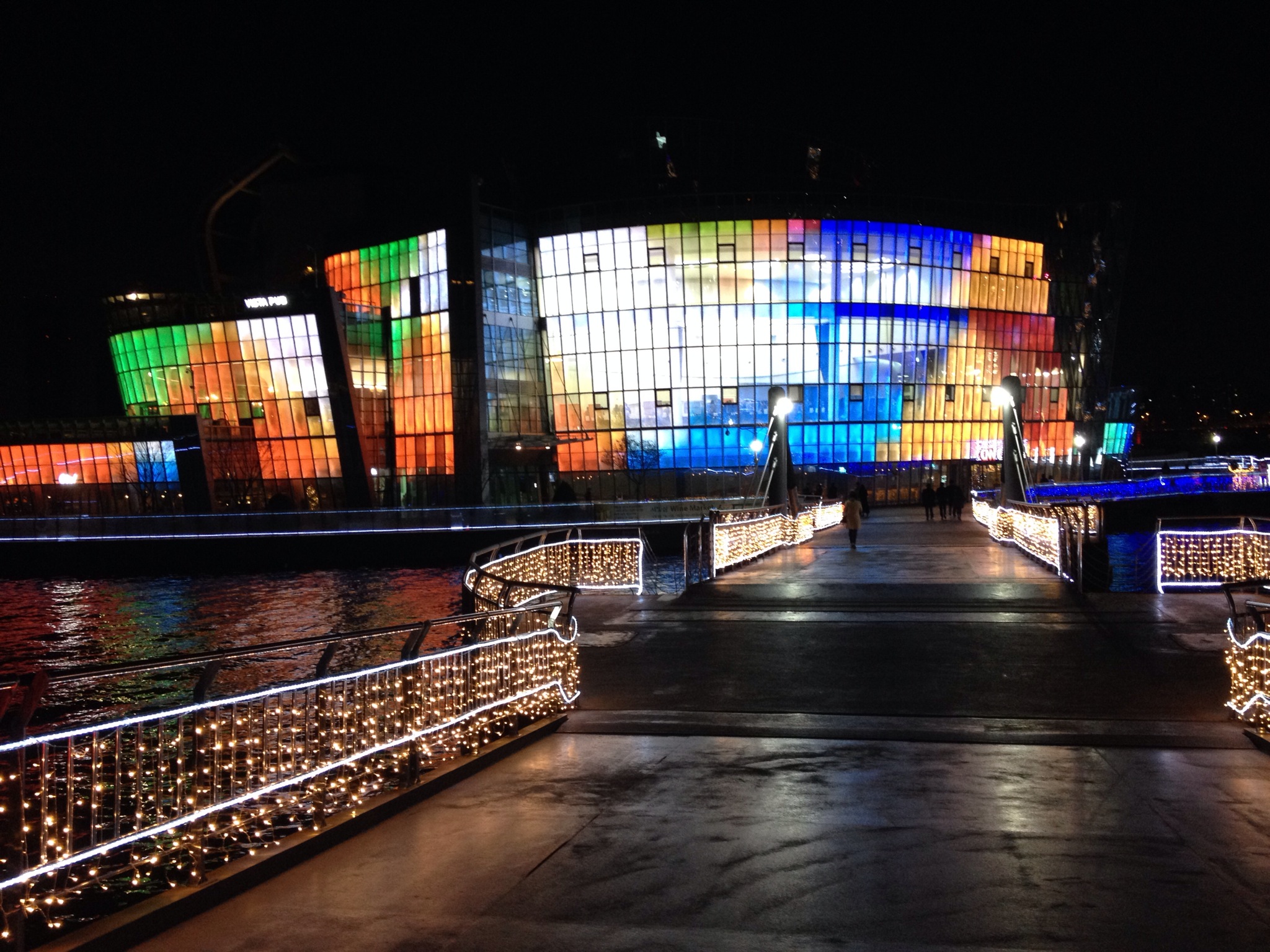 A few pictures of friends* we ran into at the reception for the Day of German Reunification.  The 2nd picture is of the eponymous Chef Meili of the Austrian restaurant in Itaewon.  Highly recommended by all the Austrians I know.

National costumes were in abundance

The (eponymous?) chef from Chef Meili Austrian restaurant in Itaewon & a friend from Austria

* If you’re one of those friends, let me know & I’ll send you full-sized copies of the pictures.

Well, it’s been quite the Week for Art.  First the Biennale in Gwangju (about which I’ve not yet posted anything) and then a visit to the opening of the Korea International Art Fair (KIAF), where we met a couple of Irish artists.  One of whom, composer Karen Power, went on an Arctic Circle Residency along with video artist Sungpil Han and technician Jinuk Baek.  They have a joint exhibit in the interactive section of KIAF.

Sungpil Han & Jinuk Baek had images from the Arctic, with an interactive system that would insert the visitors pictures into the scene when they crossed an (unmarked) line, but that wasn’t working jus then.  All that was overlayed with music by Karen Power, made from recordings of the Arctic ice & icebergs (which, it turns out, are a lot noisier than anyone expected… all the little bubbles in the ice make noise as they break free from the melting ice!).

The “TV” is the art. But the pic makes it look as if Aingeal is just vegging out!

Swirling light follows the objects. Like my elbow, as it turned out.

… when you’re done, they can print it on photo stock!

At the Arctic exhibit with the artists 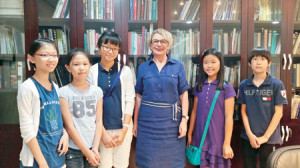 Irish Ambassador Aingeal O’Donoghue, fourth from left, and five elementary and middle school students pose for a photo at the Kevin O’Rourke Library of the Irish Embassy in Seoul, Aug. 8. / Korea Times

Our favorite Ambassador (Irish or otherwise) featured in the Korea Times yesterday, after giving a talk to a group of schoolchildren. You can read a copy of the text below, or

Here’s the text of the article (copied from the Korea Times website):

Diplomats face numerous unexpected challenges when they serve in foreign countries, where they may have to accustom themselves to very different cultural and socioeconomic settings.

Addressing five aspiring young diplomats at her office on August 8, Irish Ambassador Aingeal O’Donoghue encouraged them to train themselves to be open-minded and curious about the world if they wanted to pursue diplomatic careers.

“You have to want to know about and get to know about the country where you are posted,” she told five children during an interview with them. “That’s a really important quality.”

The children — three elementary school students and two middle school students, ranging in age from 9 to 13 — live in Bundang, a district within Seongnam, Gyeonggi Province.

The five children sat down with the Irish ambassador after their request of an in-person meeting with her was accepted.

Showing unique Irish hospitality, the ambassador began her opening remarks in the Irish language. “Cead mile failte,” she said, and then translated it into English: “a hundred thousand welcomes.”

“All those postings are very different,” she said. “Each time you have to master your new job, learn a lot about language and culture to get to know the country you are based in. That’s a challenge.”

“One of the hardest things being Irish ambassador in Korea is that the two countries are very different. So to work here successfully, you have to understand Korean culture and the way people want to do things and correct the way you do things. That takes a lot of effort.”

The envoy stressed that a thorough understanding and accurate knowledge of their own country and its culture were also important for diplomats.

“The thing actually people don’t always think about is you have to know your own country really well when you are representing your country abroad,” she said.

“It could be governmental policies or it could be culture or have you ever visited other parts of your country. All that, which is very intangible, is very important.”

During the meeting, she took questions from the children and gave answers based on her extensive experience in diplomatic service.

The five children were curious about the role of an ambassador, how they could prepare for diplomatic careers, and what kinds of experiences would help them get that plum job in the future.

Ambassador O’Donoghue said diplomats needed to be multitalented because their duties varied so much. Diplomats have to protect their nationals overseas, promote their culture, and play a role in facilitating trade with the host government.

“But it is a huge honor when your government decided to send you as an ambassador to another country to represent your culture,” she said.

When asked for information about Ireland, the envoy said her country was home to numerous Nobel Prize winners and was the only country to have a musical instrument — the harp — as its national symbol.

Historically, the envoy said Korea and Ireland were similar in that they had experienced many foreign invasions, but that culturally they were very different.

Kang Ye-eun, one of the five students, said the Irish ambassador’s presentation was “inspiring” and had given her a deeper understanding of the diplomatic service field as well as of Ireland.

“Personally, the opportunity to meet the ambassador made a huge difference in my view of the job. She encouraged me to become more interested in the actual job and inspired me,” the middle school student said after the meeting.

“I thought that Ireland was a really interesting country, which is quite similar to our own country.”

Woo Min-joo, a fifth-grader, said she came to realize that being a diplomat was tougher than she had initially thought.

“Before meeting the ambassador, I was not so sure of what ambassadors do. But after her presentation, I realized that it is a hard job to do,” she said.

Another fifth-grader, Park Woo-min, said after the meeting the Irish ambassador he was motivated to study English harder so he could better prepare for his future career.